Share All sharing options for: Monica Pope's Best Stories From the 'Trenches'

Welcome to a new Eater Houston feature we're calling Employee Exodus - where chefs themselves or their employees walk-out, get fired or just don't show up for work. 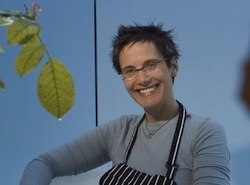 Every chef has a war story about a busy night, chefs, stages, bus boys all clamoring to feed a packed house when suddenly one spoke in the wheel decides they have better things to do than sweat, get yelled at or create dishes for ungrateful patrons.

Usually these stories are accompanied by wild gesticulation, table slapping and loud gasping, but luckily for us our first trio of walk-out/employee firing stories is by notoriously centered chef, Monica Pope, owner of t'afia and Beavers in Houston, Texas, as well as Top Chef Masters contestant.

To preface her walk out stories, Monica told us a little bit about the longevity of dealing with employee shit storms. “When we first started our restaurant we lost so many people in the ‘trenches’ we started calling it a war. At one point my father gave little army pins to everyone who had survived the opening. If we had made a list of how many people just didn’t show up for work, it would have been in the thousands.”

The Misunderstanding
“Years and years ago, I was on vacation and an event was happening at the restaurant. One of our guys was late, then later and finally didn’t show up. We thought something might have happened and we let him go. Later we found out he was mugged and unconscious.”

Mixed Signals
“My first restaurant was a monster of a place, 6800 square feet. My brother, who worked for me at the time, came into the kitchen during service and asked if he could cut someone. I made the universal signal for cutting, finger across throat. My brother misunderstood and fired the employee. He never came back.”

The Lazy Ass
“We had one person we sent to do a private party and she disappeared. Later when I called her to find out what happened, she said she quit because she didn’t want to walk up the stairs.”

If there is a lesson to be learned here, Employee Exodus stories serve the same end as parables, in this case – people that hate walking, get mugged or just leave after getting cut from service can’t be trusted.