Share All sharing options for: Tiffany Richie and Melinda Mayes of Rockwell Tavern & Grill in Cypress Talk Beer and Circumstance 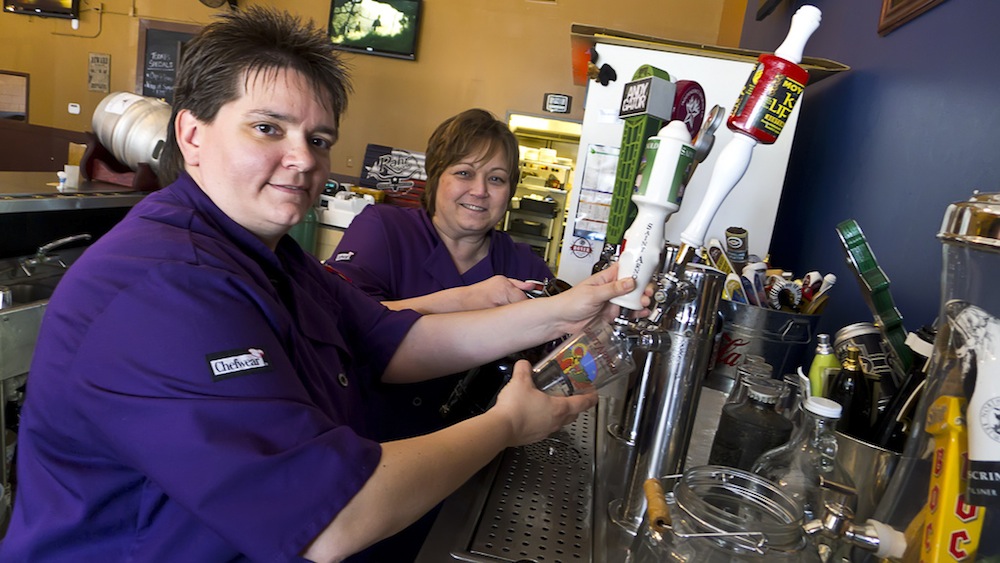 Tiffany Richie and Melinda Mayes are the very proud owners of Rockwell Tavern & Grill. Located in the suburb of Cypress where chain restaurants abound, it's an unassuming place to find an independently owned spot with a massive selection of craft beers and creative, scratch made food.

Richie and Mayes are the third owners of Rockwell and told Eater how they took over the restaurant unexpectedly in three days (in February of last year), how the stars have been aligning for years to create this opportunity (they just didn't know it at the time), and explain what exactly their "Three Legged Pig" dish entails.

Your restaurant has a storied past. Tell us how you became owners of Rockwell Tavern and Grill.
Tiffany: We're the third owners of Rockwell. I came to work for the original owner in June of 2010. He was looking for someone to basically clean up the front of the house and in September, he sold the business to Hein and Maria Lombard. At that time, I remained on staff as general manager for them, because I knew how this place ran. Maria had several years of hospitality experience as the GM at a hotel, and really wanted a restaurant of her own, and her husband was an out-of-work engineer who just wanted to get back into engineering. He had no heart for the restaurant business whatsoever. So, they came in, they started doing great things, making a new name for themselves, then unfortunately, just a couple months after they took over, she actually had an aneurysm in the restaurant. She held on for a little while, but she never fully recovered and passed away in early January of this year. At first, Hein said he was going to keep the place open in her honor, in her memory, but he just couldn't come in everyday. It was just really hard on him. He came to me on a Wednesday morning, told me that he was going to shut the doors at the end of the week. I really had a connection with my staff, I had a connection with our clientele. The first owner was in the kitchen all the time; he wasn't the face of the restaurant, I was the face of the restaurant. So, as soon as I heard that, I asked Hein what it would take to buy in as a partner, and he gave me a figure, and I knew I couldn't do that alone. So, I called Melinda, who's my best friend, and gave her the rundown on it, and in turn, she called her father, who is our financial backer of this. Melinda: My mother died a little less than nine years ago, and back then my dad wanted me to open a restaurant, because he had money to invest from insurance. I was working for a college at the time, and I just started, and the idea of starting a restaurant from scratch was just overwhelming for me. So, he bugged me for a year and I told him, "do you ever want a home cooked meal again?" and he said, "yes." And I said, "If I'm cooking all the time, guess what? You won't ever get that again." So he quit bugging me. So, when this came along, I called my dad. I had been volunteering here, just helping Tiffany keep on top of things once Maria became ill. I knew some of what was going on, so the three of us talked and within three days we'd formed our partnership.Tiffany: I told Hein that I was interested in becoming a partner, he came back and said, for what I was looking to invest in the partnership, well, I should say, the three of us - Melinda, her father and I - for what we wanted to invest in keeping the partnership going, Hein sold us the entire restaurant for that. Because he saw that we believed in the place and it was too emotionally uncomfortable for him to be here. And he didn't want to close it, but he didn't want to be here either and he didn't want to be an outside owner.

It sounds very fated. Do you think it was meant to be or were you just doing what you had to do?
Melinda: At the time I think it was something that we felt we just had to do because we felt bad for the employees, we felt bad for the restaurant, because of our customer base and everything. But looking at it now, if things had not fallen into place over the past couple of years, I would have never made this kind of risk or gone into this type of a venture, but I was having a real hard time at my job, my boss had changed and we weren't very compatible as a work team, and actually, how Tiffany ever even got a job here was that the previous owner's girlfriend was the previous boss. We were here as customers first, then we became friends with the owner, she [Tiffany] became an employee and now we own it. When you look back on it, people have asked me, "did you see yourself here?" Well, no. You know, just one thing after another kept falling into place, not because we wanted it to, it just did. There's been some real hardships. I think it's very hard to take over someone else's dream once it's already started and make it your own (even though it's something similar), but we have some of the best customers anyone could have. I'm telling you Tiffany: They've embraced change. They've actually convinced us to take some leaps and do some stuff that we didn't think we could do. Eater: Like what? Tiffany: In addition to our food, we're also known for our beer selection, and they've convinced us to do beer dinners where we do like five-course plated pairing dinners with various breweries, and we were really nervous about that, because originally this place was just a burger joint and now we're way beyond that. We're bringing out new food, we're rolling out a new menu. We're giving the place a new image that our customers have wanted, and we've been a little nervous about, but they're great to embrace it. Melinda: Tiffany had started, before we even bought the place, teaming up with local breweries. We're very much about supporting anyone in the industry, but Texas and local-based is something that we're trying very hard to stick with. Because, we feel like small business owners, we need to do that for everyone else too, and the local breweries have been great to us. We've actually been asked, and we did it over Labor Day weekend, to be in the VIP area of of the Brewmasters International Beer Festival at Moody Gardens. We took one of our signature dishes and paired it with one of the beers they were going to be showcasing there and we did 600 tastings of that over 2 days. And it was a huge effort on our part, but it was such a rewarding thing to do. It was a real confidence booster. Tiffany: One thing, we packed up all our food and took it two hours away and we met customers that were in our back yard that didn't even know who we were and we got first time customers out of that.

What was that signature dish?
Tiffany: It's called a Three-Legged Pig. It's a beer-braised pork shank served over a potato apple hash and topped off with an apricot jalapeno sauce.

So, obviously you've had plenty of hardships, but what are some of the biggest ones you've encountered over the last (almost) year?
Tiffany: Because we jumped into this with only a couple days notice, we didn't have a whole lot of operating capital to work with, so we had to scrimp and bare bones marketing. We didn't do any major marketing for a while. That kind of thing. We've also had to deal with an image of taking over a restaurant that's already been taken over once. There was a little bit of change that happened between the original owner and Maria and Hein, and we had to assure people that there wouldn't be any major changes right off the bat between Hein and us taking over. It was very customer based in the beginning. We've done really well on keeping things the same, while improving stuff. Customer service has improved, our cook times have improved. Melinda: We have an awesome staff now. That was another major thing. Not being in this restaurant before. I mean, Tiffany had been here a while, but learning the ropes of what kind of staff you're looking for...We want a family atmosphere here. We have our craft beer people, but we have families in the area too. So, when you come to our place, we want you to feel like you're coming to our home. We want our staff to make you feel comfortable. We have a staff member right now who remembers people's names, who remembers what you ordered and those are the types of people we want and hope stay with us for a very long time. So those are some of our biggest hardships...well, that and our parking lot. We have some issues with where we are. We'd like to move eventually, but that takes a lot of capital to do. We would stay in the area. We've had a lot of people at our beer dinners ask us, "so when are you leaving us?" And I say, "well, what do you mean?" And they say, "well, the food you're putting out is what you get in the loop and you would make money hand over fist." And we know that we're competing with a lot of the people in the loop, but we don't want to leave this area. This is where we live and we want to be a part of our community.