Welcome to The Gatekeepers, conversations with the fine ladies and gentlemen that stand between you and those hard-to-get tables. 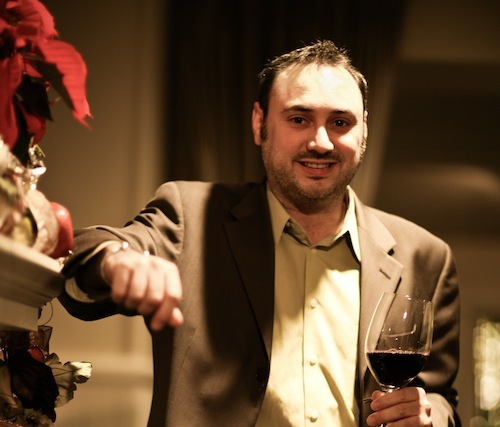 It's been two months since Marc Borel took his post as manager at comfort food bistro Backstreet Cafe, but it was a very circuitous route that got him there, with stops in radio and a tennis desk along the way. Once the sommelier at Samba Grille and more recently Bacchus, Borel now seems right at home in his role as the "smile in a suit."

Borel talked to Eater about restaurant marriage proposals, finding history in Houston restaurants and the strength of pours in the Woodlands.

How did you get into the restaurant and hospitality industry?
I grew up in Port Arthur and was on the radio for a while over there. It was something I wanted to do ever since I was a little kid. After I moved to Houston, I worked at an oil company doing similar things, an ad agency and I did my own thing for a while. On the side, I went to work for the Houston City Club — only part-time and only so I could play tennis indoors. I worked at the tennis desk and it was really humbling and I really enjoyed it there. I worked my way up to member relations. Every day during lunch, I was there and I was the "smile in the suit" and it was there that I started enjoying this hospitality thing.

And you're well-known known as a sommelier, how did that happen?
While I was working at another country club, I lived in Midtown and got a job at 13 Celsius, almost by accident. The owner, Mike, was getting married and just needed someone part-time. I ended up staying there for a while and I loved it. That’s when I decided I wanted to segue into that.

What is your approach to making a wine list?
I became known as the guy who didn't bring the big names in. There's nothing wrong with that, we carry some here, but at Samba Grille, I was on the floor and hand-sold everything. I wanted to know the story behind everything, why the label looked the way it did. And that's what I tried to express to customers.

How has the transition from wine guy to restaurant manager gone?
The transition was not seamless, but it wasn't as difficult as I expected. All these different businesses that I've represented or promoted, all of that pushed together builds someone who can do this. This place has been here for 28 years, it's a machine. I come through and turn a screw every now and then. It just kind of does what it does.

Aside from having a well-known chef and a popular back patio, what do you want this restaurant to be known for?
I think one of the things that sets this place apart, and is a testament to its heritage and history, is that we have people who have worked here for 28 years. I have one gentleman on the floor right now who's been here ten years. And that's not at all uncommon here. When I started, I was used to waiters being in college and trying to get by, but it's not that way at Backstreet. When the regulars come here, they ask for the waiters by name.

And that's nice, especially in a city like Houston that isn't very old and doesn't hold onto a lot of the past.
This whole Top Chef thing passing over Houston — a city with such diversity, to be able to come to a place like Backstreet, where you know you're going to get a fantastic meal and good wine and superior service from a guy who's been your waiter for 10 years. Are you kidding? It sells itself.

Have you witnessed any marriage proposals?
This happens all the time, but I've only seen a couple. This couple was sitting in front of the fireplace upstairs. My host told me, "All of a sudden all I heard was applause." What happened was, they were just chatting like you and me, and he stopped the conversation and got down on one knee. When he stopped, she looked at him like he was crazy, but when he dropped she knew what was happening, right there in front of the fireplace. It was gorgeous.

When you're not here, what are your favorite restaurants?
I live really close to Stella Sola. Nathan, the GM, and I worked together at 13 Celsius. I’m at Coppa at least once a week. And it started off just because I wanted to support my friend [and executive chef at Coppa] Brandi [Key]. She makes me so proud. I knew her when she was at Pappa's and I knew about her aspirations but to see her doing this now is just beautiful.

What is your most common customer complaint?
It's typically either having to wait for a table, or they didn't realize they should have made a reservation. Although you don't really have to here, but people come in with a set idea of how their evenings are going to go and if it changes...I had one gentleman the other day who complained that his drink wasn't strong enough. So I asked him, "What are you drinking?" He said, "I'm drinking a Scotch on the rocks." And I said, "Well, it's all alcohol." He said, "It's too short. In the Woodlands, we get three ounce pours." He spit some obscenities and I offered to buy him a double. If that's how they do it in the Woodlands, I don't know.

How do you usually handle those prickly situations? What's your strategy?
I don't want to say I look forward to them, but it's always been something that I've been able to work my way out of. Someone can complain about something like the temperature of their food or whatever and before it's over, they're shaking my hand and taking my business card. If I want them to come back, I need to make sure they're happy. And I don't mean giving things away. You can go a long way with a sympathetic ear and a smile. As long as your customers feel like you're listening to them and addressing their concerns, well, sometimes you do have to give them something. You have to think about the future. Do I want this person to come back again? The answer is always yes.

For more Gatekeepers published today from across the Eater Universe, head over to Eater National.