Share All sharing options for: People Stealing Shit From Pilot Light RG Before They've Even Opened a Restaurant 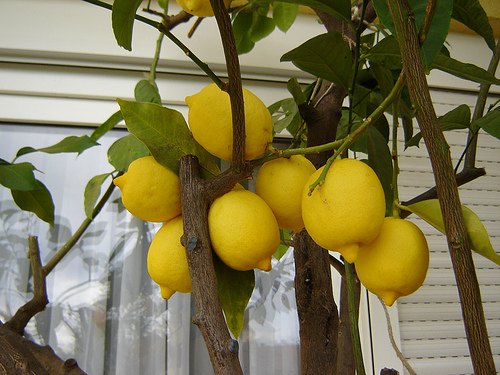 While Pilot Light Restaurant Group chefs Seth Siegel-Gardner and Terrence Gallivan were busy staging intimate pop-up dinners, working recipes in their test kitchen and looking for spaces to house a permanent restaurant, someone was busy stealing a "space-warming" gift in two stages.

This non-traditional theft story brings new meaning of putting "the cart before the horse," or should we say, "the pot before the tree"? Siegel-Gardner and Gallivan gave us the details of this head-scratching burglary.

As a space-warming gift [for their test kitchen], we were given a lemon tree by a friend of ours. With only kitchen equipment at hand, we placed our new sunny friend in a large cast iron pot. Soon enough we found a lot of uses for the lemon tree - staging for a dessert course, general atmospheric brightening and of course lemons. During the summer months the lemon tree was starting to wilt, so we left her outside. After service one night we went out to find our lemon tree on the ground, mulch everywhere and no pot. Just so you know, the pot weighed about 40 pounds. Not an easy item to lug around on bike or a shoulder.

With no pot, we left her outside and hoped for the best. Two days later, someone came back and stole the lemon tree. We have (literally) no idea why.

Have any interesting stories of restaurant or bar related theft? Send them our way and you may end up with your very own post on Eater Houston.