Friends of Eater Name Their Single Best Meal of 2011

Share All sharing options for: Friends of Eater Name Their Single Best Meal of 2011

As is the tradition at Eater, our closeout of the year is a survey of friends, industry types, bloggers, and readers. So far, we've covered: Best Standbys of 2011, Favorite Newcomers, Best Dining Neighborhoods, One Word Describing the Year and Biggest Dining Surprises. 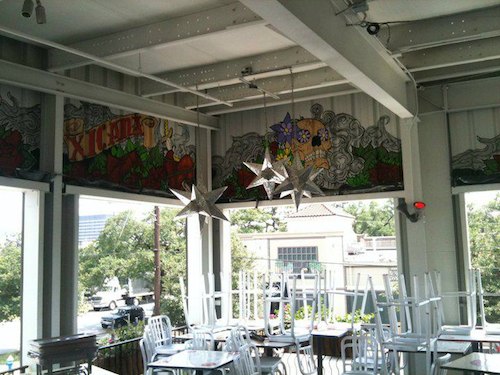 Upstairs at Xuco Xicana, where someone had their best meal of the year. [El Xuco Xicana/Facebook]

What and where was your single best meal in 2011?

Rebecca Masson, cheftestapant on Top Chef Just Desserts, owner of Fluff Bake Bar: The Les Sauvages dinner with Ryan Lachaine. It's awesome to see the young talent in this city getting to shine.

Katharine Shilcutt, food critic for the Houston Press: The one and only meal I had at Bootsie's, the night before the comet Elenin was supposed to "destroy" the Earth in the minds of certain, highly disreputable scientists. I remember thinking that if that was the last meal I'd ever eat before the comet killed us all, I'd die happy.

Greg Morago, food editor for the Houston Chronicle: My fascination with chef Anita Jaisinghani’s Pondicheri led me to make a long-overdue visit to her more upscale and refined Indika where she is turning out absolutely amazing modern Indian fare. Her red beet soup (pureed with coconut, garbanzo and ginger) and grilled Texas red snapper in a spinach and fenugreek sauce had me swooning.

Teresa Byrne-Dodge, editor/publisher, My Table Magazine: A lunch at Lilette, on Magazine Street in New Orleans, for my birthday. Oh, and there was also a knock-out, over-the-top, to-the-moon-and-back dinner at Tony's here in Houston.

Robb Walsh, co-owner of El Real Tex-Mex Cafe and former Houston Press food critic: Lunch at Quattro in the Four Seasons where chef Maurizio Ferrarese whipped me up some Vitello Tonnato Moderna as an appetizer followed by lobster ravioli in saffron cream. Honorable mentions: A dozen courses of tweezer food with Francis Lam at Commonwealth in San Francisco, and a plate full of whole hog barbecue and cornbread at Skyline Inn in North Carolina.

Christina Uticone, freelance writer, critic for 2 Dine For: In Houston I would have to say a Restaurant Week lunch of coq au vin at Philippe. Of the whole year, it was definitely my dad’s homemade sauce when my parents came to visit.

Bobby Heugel, co-owner of Anvil Bar & Refuge, Underbelly, Blacksmith, The Hay Merchant: The best meal I had was at Catalan just before Chris Shepherd left.

Ruthie Miller, freelance food blogger: I think I'll go with my first trip to Foreign & Domestic in Austin. I'd heard great things, but really didn't know what to expect, and then was just blown away by the ingenuity. We tried most of the menu, and every dish rocked, desserts included. Saison in San Francisco is a close second.

What and where was your favorite meal of the year? Comment if you please.