Biggest Dining Surprises of the Year

Share All sharing options for: Biggest Dining Surprises of the Year

As is the tradition at Eater, our closeout of the year is a survey of friends, industry types, bloggers, and readers. So far, we've covered: Best Standbys of 2011, Favorite Newcomers, Best Dining Neighborhoods and the One Word Describing the Year. 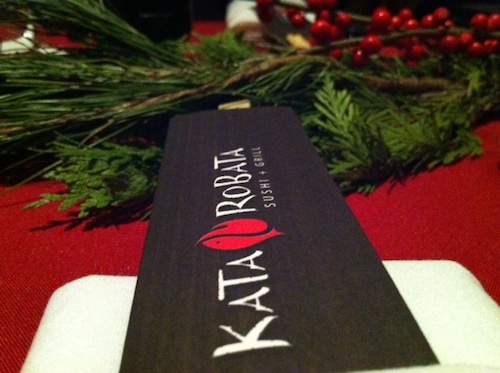 Kata Robata, the scene of the Umami dinner where (surprise!) fugu was served. [EHOU]

What was the biggest dining surprise of 2011?

Bobby Heugel, owner, Anvil Bar & Refuge, upcoming Underbelly, The Hay Merchant, Blacksmith: Moneycat Brunch at Umai - some of the best food that was served in Houston all year long!

Sarah Rufca, associate editor of Culturemap: I think Catalan closing, as much as I understand the thinking behind it, was a huge shock.

Christina Uticone, blogger for 2 Dine For: Villa Arcos over on Navigation. It doesn’t look like much from the outside, but their tacos are AMAZING. Fast, cheap, no-nonsense food. My favorite kind.

Teresa Byrne-Dodge, editor/publisher for My Table Magazine: Nutella as a trendy ingredient. Its charm is lost on me.

Katharine Shilcutt, food critic for Houston Press: Capri, a charming and wonderfully authentic Italian restaurant in a strip mall between Spring and The Woodlands.

Nishta Mehra, food writer, Blue Jean Gourmet: The proliferation of food trucks, maybe, or the number of young, talented chefs who decided to stake a claim, so to speak, and stay in Houston, work to shape the food scene here.

Ruthie Miller, food writer, Culturemap contributor: Lots of surprises for me... 1) The dearth of solid higher-end restaurants, 2) the number of quality unemployed chefs in Houston, 3) how much I enjoy several of the newer food trucks -- like Green Seed Vegan, Good Dog Hotdogs, and the Modular, 4) how the food community rallied to support farms during the Bastrop fires, 5) the Pilot Light announcement.

Alvin Schultz, MasterChef contestant: Revival Market- I should have known about it, but didn’t? everything there is FABULOUS! F. A. B. U. L. O. U. S!

Greg Morago, food editor, Houston Chronicle: The little store that could: Revival Market. It not only was the place to get the best local food products in town, it made us think about where our food comes from, how good it can be, and why it matters. Revival underscored all that’s truly important about eating and buying locally. I have enormous admiration for partners Morgan Weber and Ryan Pera and what they’re doing.

Amber Ambrose, editor Eater Houston: Surprise(s) - Randy Rucker leaving Bootsie's, all the collaborations between various chefs - whether it was through tasting dinners, events or otherwise - and eating the rarely-served-in-the-United-States fugu (blowfish) without dying at the Umami Dinner at Kata Robata earlier this month.

What was your biggest dining surprise? Chime in below and leave a comment.