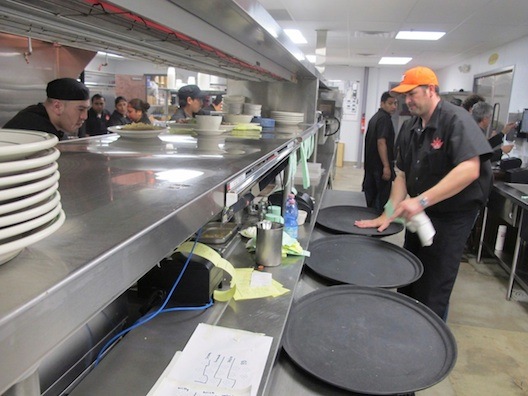 Behind the scenes with Bryan Caswell at El Real. [El Real/Facebook]

Alison Cook finds El Real's inconsistency disappointing after all the "elevated rhetoric" that preceded its opening this year, only awarding it one star. Among the various snafus were "the vehement salt levels that seem to ebb and flow," a mealy, chewy steak, a red table salsa that needs a little more pick-me-up and a lack of consistency "in its much-trumpeted mission of restoring vintage Tex-Mex to glory." The "dismal frozen margaritas" were also a point of contention being "all too quick to melt and afflicted, on occasion, with off tastes (once faintly chemical; once reminiscent of coconut suntan lotion)."

However, the news was not all bad for Cook's one-time rival, former Houston Press food critic turned El Real partner, Robb Walsh, et al. Cook found pleasure in a hidden "fiery carrot-based salsa - full and intriguingly fruity - waiting back in the wings for she who asks," the beef nachos, lard-laced refried beans, puffy tacos and a plate of "classic cheese enchiladas pooled with a stirring chile con carne gravy." [CHRON]

Katharine Shilcutt stumbled upon a Vietnamese spot in the 'burbs serving up some serious game...meats. Thanh Phuong in "old" Pearland wowed the Houston Press food critic as well as dining companion and local chef Chris Shepherd with venison carpaccio, "thin slices of deer meat, a dark ruddy color that was almost translucent, had been marinated in lime and lemon juice, with powerful, pungent notes of fish sauce punctuating the citrus marinade," along with deep fried rabbit, chicken wings in caramelized fish sauce and clay pots full of pork and vegetables.

Shepherd, whose highly anticipated restaurant, Underbelly is under construction, was so entranced with the spot that he asked to stage (basically an unpaid internship for learning purposes) at the little restaurant down south. Word is, he scored a place in the Thanh Phuong kitchen. [HP]