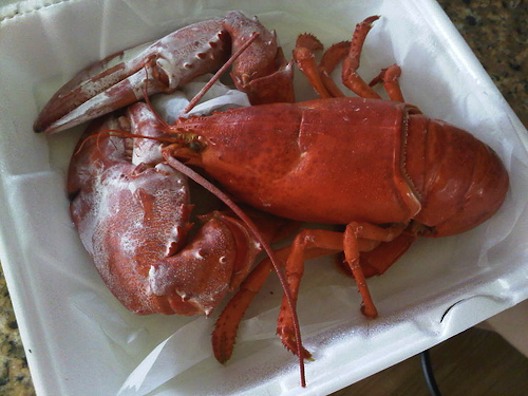 Is that a lobster in your pants, or you just happy to see me? [Robert Banh/Flickr]

Scott Castell, Executive Chef for Brenner's Steakhouse, recounts a tale of bravery from a few years ago in which a busboy risks his manhood in exchange for a fancy dinner at home with his girlfriend.

We had a younger busboy that was a long term employee that kept going in and out of the cooler a little too frequently one night. Busboys have a reason to go in there, but not for that many times, especially at the end of the night. I had already left for the night, which is when most of these problems can happen. When he exited the cooler after one of his many visits, he was greeted by one of the floor managers. The manager asked him why he was in there and the busboy got all tongue tied. The manager then noticed a bulge in the busboy's pants and asked him to turn out his pockets. The busboy had managed to shove a lobster into his pants pocket. His pants were pretty baggy, but it had to be uncomfortable, especially with all of the sharps and 'hazards' a lobster possesses to both his leg and his manhood. The busboy told the manager that he was having his girlfriend over for dinner the next day and he wanted to do something special for her. He told him that he understood, but that we had to let him go because of this.

If you hear of any lobster thefts, antique prints being pried off bathroom walls, confessions of serial pint glass burglars or any other shit being stolen, please send us your story and it may end up on Eater.