Masson Off to a Strong Start; Kuch is "Lost in a Forest"

Share All sharing options for: Masson Off to a Strong Start; Kuch is "Lost in a Forest"

Rebecca Masson of Fluff Bake Bar and Vanarin Kuch of Tiny Boxwoods are representing Houston in this season of Top Chef Just Desserts. Eater Houston will be following their every move, thanks to fellow Houston reality show contestant, Alvin Schultz. Recently appearing on Fox's MasterChef, Season 2, Schultz brings his own behind-the-scenes knowledge to the table. 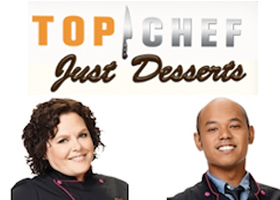 Last night, Vanarin Kuch and Rebecca Masson faced off against 12 pastry-cheftestapants from around the country in the premier of Bravo's Top Chef Just Desserts Season 2.

The chefs are thrown into competition with their first "Quick Fire" challenge: create a modern interpretation of a soda fountain classic. The feeling of having a seemingly impossible amount of time (30 minutes) to run around a kitchen you don't know, and make something incredible is a feeling I can relate to.

Masson's team put forth a white chocolate banana milkshake topped with Cap'n Crunch "fried" in liquid nitrogen. Their "breakfast cereal in a glass" dessert is selected as one of chef/judge Johnny Iuzzini's favorites of the competition.

In the end, things don't quite shake out for Masson and teammate Carlos Enriquez as they're named 2nd best and do not get immunity going into the elimination challenge.

In the next challenge, the chefs' egos, personalities, and interpersonal drama comes out in full force... at least in the edited for television version. If their editing team is anything like the one that did MasterChef, rivalries (which there appear to be plenty of) are being over exaggerated for the drama.

The chefs get split into four teams for the elimination challenge where they'll have to create two plated desserts and one "fantastical" showpiece which capture the essence of a classic fairytale.

Masson is on Team Goldilocks and continues her strong start in the competition. Her team is one of the best of the evening (as selected by the judges). Despite some doubtful advice from her team, Masson's three bears porridge dessert of Sorbet (too cold), New Mexico infused sautéed cherries (too hot), and porridge pudding (just right) is a favorite of the judges... and darn clever if I might add. Sadly, her team places second again, but tonight appears to be just the beginning for Houston's own self-proclaimed Sugar Hooker.

Kuch is part of Team Hansel and Gretel and comes dangerously close to elimination. The judges call out his team's showpiece as unfinished and unrefined.

Chef Kuch's plated dessert is butterscotch brioche, pineapple-gin sauce, goat cheese mousse, dehydrated/smoked pineapple, and white chocolate-sage dust. He intended for the unique flavor combination to represent a walk through the forest. However, judge Dannielle Kyrillos described the flavors as "being lost in a forest... not flowing together... and not representative of Hansel and Gretel".

At judging, Kuch is safe but the bullet whizzes past his head and take out teammate (and fellow Texan) Lina Biancamano.