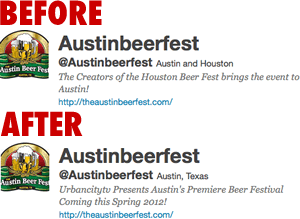 Yesterday the Austin Beer Fest was announced, and, based on a Twitter account bio for the festival that read "The Creators of the Houston Beer Fest brings the event to Austin," the original Eater story linked the two events.

Soon after the story ran on both Eater Austin and Houston, the organizers sent a note to Austin editor, Paula Forbes, attempting to distance themselves from the Houston Beer Fest. They had conveniently since changed the Twitter profile, completely removing "Houston Beer Fest" from the description. So, are they connected or what?

One of the organizers of Austin Beer Fest, Dexter Bayack, attempted to set the record straight.

Maybe you're not affiliated but there are ties, technically?
Well there are but you know something, it has nothing to do with Timothy [Hudson]. Timothy was the organizer of the Houston Beer Fest.

But some of the original Houston Beer Fest organizers are also involved in the Austin Beer Festival, right?
That was why I kind of [originally] put it [on Twitter] as the creators but really Brent [Villareal] did not have any hand in creating the event [Houston Beer Fest]. It was all Timothy [Hudson]. That's why we didn't want the tie, that's why I changed it [after the Eater stories ran] because we didn't want the tie. We thought it might benefit us in some way but looking at how the Houston Beer Fest was run, yeah, we actually changed that on our Twitter page. So basically nothing — this has nothing to do with Timothy [Hudson].

Read more of the interview at Eater Austin.