Share All sharing options for: Latin Bites on Working with Family and Why They View Alison Cook as Their 'Godmother' 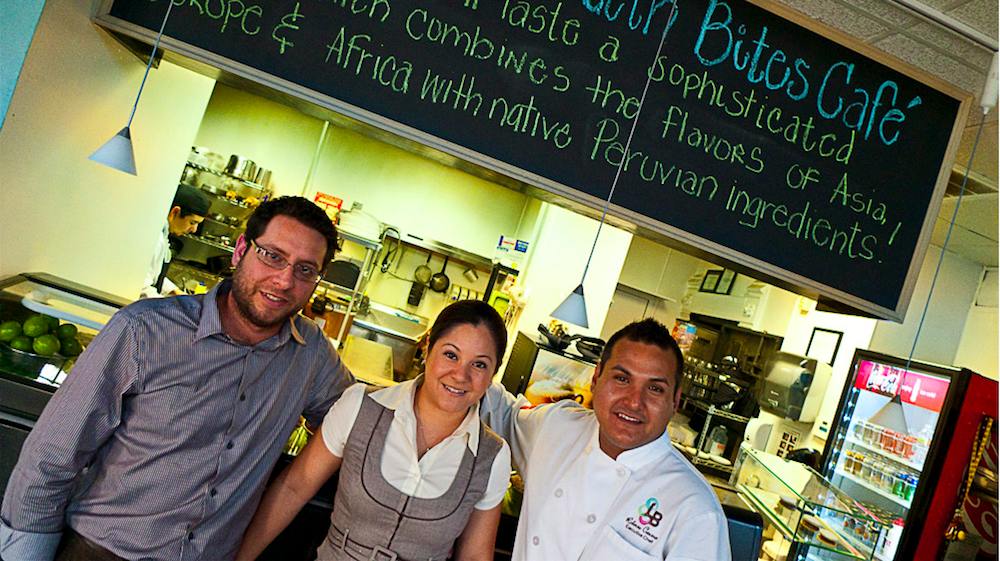 Latin Bites' trio of owners are all related, and they think that the arrangement is perfect for running their tiny Peruvian restaurant, serving critically acclaimed ceviches and traditional dishes, in the Warehouse District downtown. General manager, Rita Castre is wife to co-owner Carlos Ramos (who will be the beverage manager at their new, much larger location, opening this December) and sister to executive chef, the soft spoken, but powerfully creative Roberto Castre. Their one year anniversary was last month.

Nervous about doing an interview because Spanish is their native tongue, they finally relaxed and charmingly recounted their long journey from a big idea hatched inside a Chili's in Peru to their explosive success in the first year of business.

So, it's been predicted that Peruvian food is going to be the next big thing, what do you think about that?
Carlos: Wow, that's really great news. Rita: It is, it is. Carlos: Especially for us, being Peruvians, we're very proud of that. Also I think it's something we kinda already knew since we started in this business. We knew it was something big coming. Rita: We could have done a lot of other types of food, since Roberto [Castre, executive chef] has a lot of skills; Italian, American, Japanese. He had a lot of experience in different types of cuisine, but we decided we needed to do our own culture.

What has been your biggest obstacle in your first year of business?
Carlos: The problem was at first, the size. Because when people started coming in big groups, especially for lunchtime, the parking wasn't easy, so we had that problem. And also, when people start calling the restaurant and want to make reservations, we would be booked because we are so small we will fill up quickly, especially after those big reviews in the New York Times and stuff. Rita: And sometimes people don't understand because they'd never been here and they didn't know the restaurant was so small. We have only 32 seats. Carlos: Of course we wanted to seat everybody, but we couldn't. But that's about to change. Rita: But the main issue we have is parking. It's city streets and there are a few parking meters, but it's not enough for the customers we have now. Roberto [who came into the interview halfway through]: The location - parking, restaurant is very small, the restrooms are very, very small. But I think the people don't care about that.

You had a lot of positive reviews, how did that affect your business in a good way or a bad way?
Carlos: Well, the first review we had was from the Houston Chronicle, Alison Cook. Rita: We had just opened in September and she came at the end of October. She took us by surprise. At that time, we weren't thinking about reviews and we didn't meet her. So we don't know when she came, how many times she came, nothing. Carlos: And that's when it started getting really, really big. Rita: After that, it was crazy. Carlos: After that, it's been non-stop to be honest. Rita: Actually, we didn't meet her, but we consider her like a godmother.

I'm assuming the only problem from a good review is keeping up with demand, is that accurate?
Rita: It was hard for us, but we tried to catch the wave. But the best thing is that we have a good team. Roberto managed the kitchen in a perfect way. Many of the people that work with us are Hispanic and I think it's a plus for us, because we speak Spanish too. And a lot of our team, they're family/related too.

You're all family, how do you get along?
Carlos: We get along like family. At the end of the day, we're all family. In this case, it's business. We are just working hard towards the same goal. Rita: So far, the communication and decision making is easier when you're family because you don't have to wait for a meeting. You can do it in your own house at your table.

How did you all decide to open a restaurant together?
Carlos: We always had this dream of having a restaurant?we started in a restaurant. Rita: We met in Chili's, the three of us. Carlos: We worked in Chili's, but in Peru [before Rita and Carlos were married]. Rita: It was 15 years later. Right now we are all laughing about that day we were talking in Chili's.

Rita, what was it like growing up with Roberto? Has he always liked cooking?
Rita: I guess it's something that runs in my family, because my sister is a chef too. I am the only one that is not. Carlos: She [Rita] doesn't cook. Rita: *Laughs* I studied administration for a reason: to manage my brother (and my sister).

Have you ever had a family argument about the restaurant?
Rita: Because me and Roberto are brother and sister, it's easier for us to argue. Carlos is always in the middle. Carlos: I don't talk much, or I get in trouble. Rita: He's the referee. *Laughing* But, you know sometimes, the next hour, it's like nothing happened. But, in the end, we're always trying to make the best decisions for the restaurant. Carlos: Like I said earlier, we are all in the same boat and we are all in the business together.

Any vacations during the first year?
Rita: No. Carlos: And we don't think we're going to have one next year, either. Rita: *Laughing.* Carlos: At the beginning, we thought we wanted one day for the family since we're a family business. We took Sundays, but then we had to give it up because it was a good day for the business. So we ended up taking Mondays. But with the other restaurant coming, there's no day off.

What are your favorite dishes?
Rita: I am the sweetest person, so I will say my desserts. For me, the terrine is my favorite. It means something for us, because my mom recommended us to make that dessert. We use two fruits, the first is cherimoya - a fruit from Peru - and mango on the other side. So it's got white chocolate truffles and finished with dulce de leche and at the bottom, there is raspberry sauce. Carlos: Ceviche and lomo saltado. I used to go to Peruvian restaurants where I used to love to try those two things. But since I've tried his [Roberto's], in this restaurant, obviously I don't go anywhere else for it. Lomo saltado is beef tenderloin sauteed in a wok, with onions and tomatoes and it has soy sauce and oyster sauce and wine. Rita: It has a lot of flavor. Roberto: We [Peruvians] have a lot of Asian influence [in our food]. Rita: Both Chinese and Japanese as well as African and European. Roberto: My favorite is lomo saltado like Carlos and aji de gallina. It's shredded chicken with peanut sauce and aji amarillo, a pepper from Peru served with rice. But it's not on the menu. Carlos: But he makes it as a special sometimes.