Share All sharing options for: Episode 3 is Roller Coaster Ride for Houston's Masson 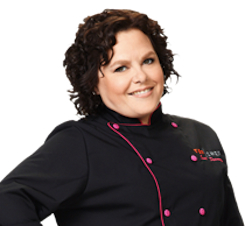 One Houstonian left in the Top Chef Just Desserts competition this week, and in last night's episode, our Sugar Fairy took a wild roller coaster ride. At the top of the show, the remaining chefs meet guest judge chef Hugh Acheson from Top Chef Masters. Masson confesses her culinary crush on Acheson. Meeting a judge that you admire feels like the climb up at the beginning of a roller coaster ride. And so it begins.

The Quickfire challenge is to create a tiny dessert that could inspire a new flavor of chewing gum. Oh, and there's a bonus prize: $25,000! That's one fourth of the prize for the whole competition... I can imagine that Masson feels like she's on the highest point of the roller coaster as she starts cooking in the Quickfire.

Masson's raspberry, panna cotta, and linzer crust dessert fails to wow Acheson, as he places her in the bottom of the challenge. This is the lowest our hometown favorite has placed so far in the series. I can totally relate to the heart drop feeling she must have experienced.

Moving into the elimination challenge, the chefs split into two teams to create a "Pink" themed dessert table-scape for Real Housewives of Beverly Hills Lisa Vanderpump. After six hours of prep and a couple hours for finishing touches, the chefs create two stunning pink-splosions in the Top Chef dining room.

At judges table, Masson stands with her team after losing the challenge. Fortunately, Masson's rhubarb rose crisp with crème fraiche sherbert is one of the favorites of the day and she is safe from elimination. However, Masson's culinary crush may have been broken, "That Hugh guy... yeah, he's not my favorite anymore..." she said as the team waited to see who would be sent home.

After teammate Nelson Paz is eliminated, the remaining chefs in the stew room are saddened...except for one. Chef Orlando Santos says, "I don't give a damn what you say... Keep your sad stories to yourselves."

And with that, we may have the resident villain of the season.

Is he really that bad? From the sound of her interview on Eater yesterday, it's all in the editing.