How Lucky's Organized a 'Posse' to Find Their Stolen Bus

Share All sharing options for: How Lucky's Organized a 'Posse' to Find Their Stolen Bus 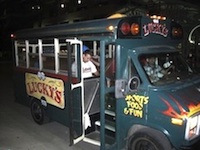 Today's story goes far beyond the typical silverware and plate stealers and directly into grand theft auto territory. An oldie but a goodie, you may remember this tale of the bus stealing bus boy from its appearance on KPRC's Wheel of Justice three years ago.

To shuttle patrons back and forth to Astros games, Lucky's Pub in EaDo (which was there before it was nicknamed EaDo, by the way) bought and repainted a "short" bus.

Right after the season started, the bus was needed for a game, but had mysteriously vanished from its parking spot. Lucky's owner, Anthony Wegman, filled us in on the details that followed. But first, here's a video of Wegman being interviewed in 2008 by KPRC about the incident.

I'm totally baffled at why someone would want to steal a repainted short bus. So we get the police down there and we have security cameras in our office. We had no idea when the keys disappeared...and we're watching videos for hours and hours. And, this is kind of ironic, but our bus boy stole our bus. I see him come in, and you know, he's not even supposed to be in the manager's office where we keep the keys. And I watch him go behind the desk and then he pulls open the drawer and I see him pull something out, and I'm like, "ok, there's the dude who did it."

So the bus stealing bus boy is hiding out, driving a specially painted short bus, but no one can seem to find him (or the bus). Wegman gives up hope of ever finding the bus...until a conversation with his buddy, Rod Ryan, who happens to be a big name morning radio personality for 94.5 The Buzz. Wegman says Ryan was ready to take action, telling him (after a few beers), "We need to get an old fashioned posse together. You need to go on the air first thing in the morning and announce to the world that somebody stole the Lucky's bus."

And while Wegman slept peacefully the next morning, Ryan took matters into his own hands and announced over the radio that if anyone found the bus they'd be rewarded with free beer for life. Yes, you read that right. Free beer...for life.

In like an hour and a half, I think even the guy who stole it, might have heard that on the radio. He drove into Katy Mills Mall. Several people jumped out of the bus and hightailed it. And this guy calls into the radio station [because he saw this happen] and says, "I found the bus, I found the bus! I get free beer for life!"

But no, the story isn't over yet. Turns out, the bus boy had evaded capture once again, so while the bus was returned to Lucky's, the grand theft auto suspect was still on the lam. Wegman had one last option: the bus boy's paycheck. Turns out, the young man that was sleek enough to steal a bus and not get caught for a few days was not actually all that clever. When he came in to retrieve his paycheck, there were police waiting for him at the bar. He confessed and was arrested.

Oh, and that free beer for life? Didn't pan out after all. The guy that found the stolen bus actually needed money more than beer (don't we all) and Wegman gave him cash to help pay some speeding tickets instead. A very unusual story where the good guys win and the bad guys go to jail, and a short bus returns to its rightful parking space in EaDo, ready to shuttle your drunk ass to Astros and Rockets games any time you visit Lucky's.