Welcome to The Gatekeepers, in which Eater roams the city meeting the fine ladies and gentlemen who stand between you and some of your favorite hard-to-get tables. 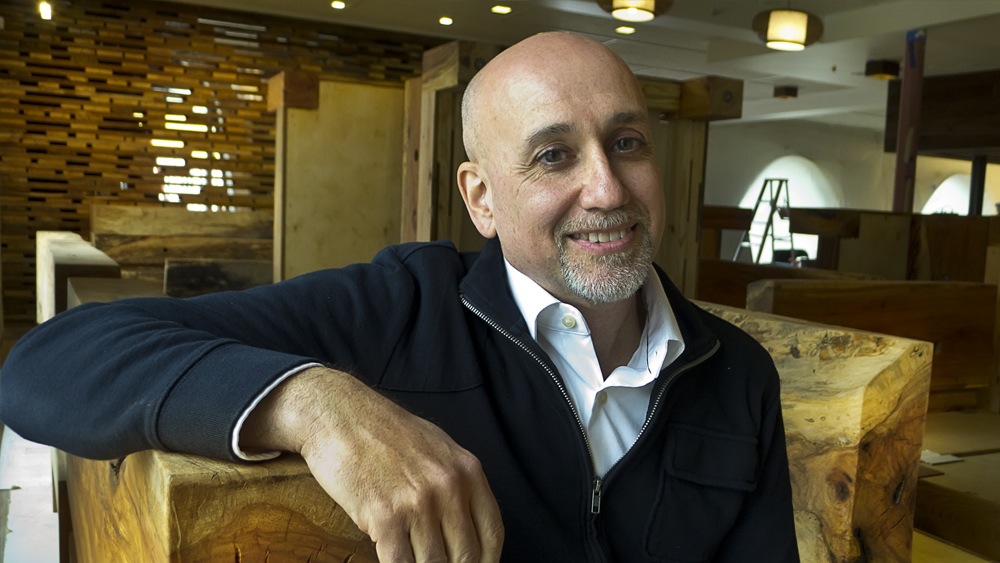 Dan Allen is one of those people that makes you feel as if you've known him for years after spending only a few minutes in his calming presence. It's qualities like this, and probably his master's degree in counseling that make him very well suited to be the general manager of the Houston outpost of Beard-winning chef Tyson Cole's nationally acclaimed franchise, Uchi.

In addition to overseeing operations, staff training and watching over the still-under-construction restaurant, Allen took time out of his sawdust-filled day to discuss his personal service pet peeves, his history in the mental health field and why he was drawn to the restaurant industry.

Is this the first time you've been with a restaurant from its very beginning?
Yes, I've been in other companies where other people have opened them, and I've assisted in that process, but this is the first time I will be the GM [general manager]. I've been a GM for at least 10 years, and various roles before that. From busboy all the way up.

So you worked your way up from busboy to general manager? Where and when did that process begin?
All over the country. I started as a busboy and was born and raised in Massachusetts, went off to college and got involved in food service there and became a student manager there and was also director of student entertainment, so I planned all the parties and the concerts and all that. When I left college, I just got into the bar business and bartending and managing. I say that I've been managing people and operations since I was 18 years old, and that's pretty much what it was. It's been a long time now.

So you started in the restaurant business, took a break to go to college and jumped right back into it?
Yeah, and I took a couple breaks. I took a couple years there and I actually have a master's degree as a mental health counselor. I worked with at-risk youths for a while and kids who were going into or coming out of jail. Really enjoyed that, but couldn't make enough money at it to make a living, and I also missed the kind of craziness of the restaurant business, you know? I'm dealing with kids who were great, I loved it, but I need to be up and moving around and the restaurant business is it. I guess it's my A.D.D. or something like that. Keeps me going.

Sounds like that master's degree would be perfect for a job like this.
People said, "ah, you studied so hard, you got your degree, what are you going to do with it?" I tell them, "I use it every day. More so now than I did when it was actually my job." It was great for me, personally, my own growth and it helped me learn how to deal with people and listen to people and motivate different types of people, deal with guests. It's not just employees that you're dealing with, you're dealing with guests too.

How do you handle prickly situations inside the restaurant?
It's situational. Every one is different and I think if I approach it trying to give them the best experience they can have, most people can be turned around. Some people can't. And those people can't; there's nothing you can do that will make it any better and you set your limits and you set your principles and that's it. And if they're unhappy with it, then unfortunately they go on and go somewhere else. Not necessarily someone you want in your place anyway.

Uchi Austin has become incredibly popular, how do you deal with the wait?
Uchi has up to a 2-hour wait many nights in Austin and that can be challenging for a lot of people to sit there. I don't personally know if I'd do it. I'd probably come on a night where it's slower, early in the evening. When you tell people it's going to be an hour and a half wait, they get all upset and you do the best you can. If we're delayed on seating, then sure, we'll send a drink out. We always send food out to people who are waiting; little samples. We pass them out almost every 20-minutes when people are sitting outside waiting. The thing is, when they get to the table, almost every single one of them gets turned around. They just get blown away by the experience. I've literally had people walking out say to me, "You know what, I would wait another 2 hours again tomorrow night to have this same experience."

People just want to know what's going on. And I tell the staff this all the time, "just keep communicating with them; give them the information." It may not always be the information they want to hear. It's when they have to sit and no one's telling them what's going on, and then they start fuming. Once it gets to that point, you can't save it.

With the size of Uchi Houston, all the hype it's getting, do you expect similar wait times?
I don't know if it's going to be 2 hours. I mean, Uchi in Austin is smaller. It's much smaller. In fact, there, it's only about 30-percent reservation and 70-percent walk-in. Here it'll be almost the opposite. It's going to be very much patterned after Uchiko, our other location. It would be great to have waits that long, but that's not necessarily a good thing. I think about 45-minutes to an hour is most people's max. That would be cool for me. If we get to a point where it's two hours, where it's that busy, then that's all the better for us. We'll deal with it. You know, in Austin, it took 8 years to get that wait.

Any special tips you give to the host staff?
Smile. Smile a lot. All of our training is based on welcoming your friends into your house, and what would you do with your friends? How would you treat your friends? How would you talk to them? Sometimes people would say,
"I'd them to hang up their own damn coat." And I say, "well, wait a minute, let's fix that." But in the end, it's all about how we can best take care of the guest within the confines of what we have. People who don't want to wait are going to have to go somewhere else.

*We somehow segued into the basic principles of the alcohol served at Uchi and some of the other characteristics that are unique to the concept.*
We only serve beer, wine and sake. Our restaurant is about the food. Sake, wine and beer augment the food. They work. Spirits don't necessarily do that sometimes. We don't want to be a scene. We don't do sake bombs either. We don't even give you the glassware to do sake bombs. If you want to pour your sake into your beer, you can drink it like that, but our glasses are designed so that you can't drop it into anything and do that. We don't have the thumping club music that plays in so many sushi places. In fact, we don't have any tv's in here. It's about the food. It's about people coming in and relaxing and getting away from all that stuff.

When you dine out, being a manager for so long, what do you look for? Do you have any pet peeves?
Yeah, I do. To me, it is attentiveness. You know, food can be mediocre and great service can make up for that. Food can be great and bad service can destroy it. It's really hard to go out to dinner sometimes. It's a hazard of the job, I guess.

Do you pick it apart in your head?
I do, yeah. For a brief period of time, I did some meeting planning, and I worked with this woman. She would, as we were setting up these meetings (of 300 people or so), always walk through it from a guest's viewpoint. She literally would be outside and we'd walk in and "what are they seeing now or what should they be seeing?" Should we put a sign there, should we not put a sign there? Are they going to be confused when they walk up? So, it's interesting when you sit in your dining room. Rarely do we sit in every table, but you have to make a point of that. Just like you're seeing something right now over there maybe that a manager might not see, because they're not seeing it from that perspective.

Any parting words before you open the doors?
I think the only thing I have, is there is a lot of buzz about us opening. We're just really excited to be here. We don't feel like we're in competition with any other restaurant, and I had a whole conversation with our staff about it the other night. Go out, support all these other places. There is enough to go around for everybody. Lots of great culinary things happening. The more we can be a part of that, the better.