The Eatsie Boys on the Food Truck Community, Snug Life and the Future of 8th Wonder Brewery

Share All sharing options for: The Eatsie Boys on the Food Truck Community, Snug Life and the Future of 8th Wonder Brewery 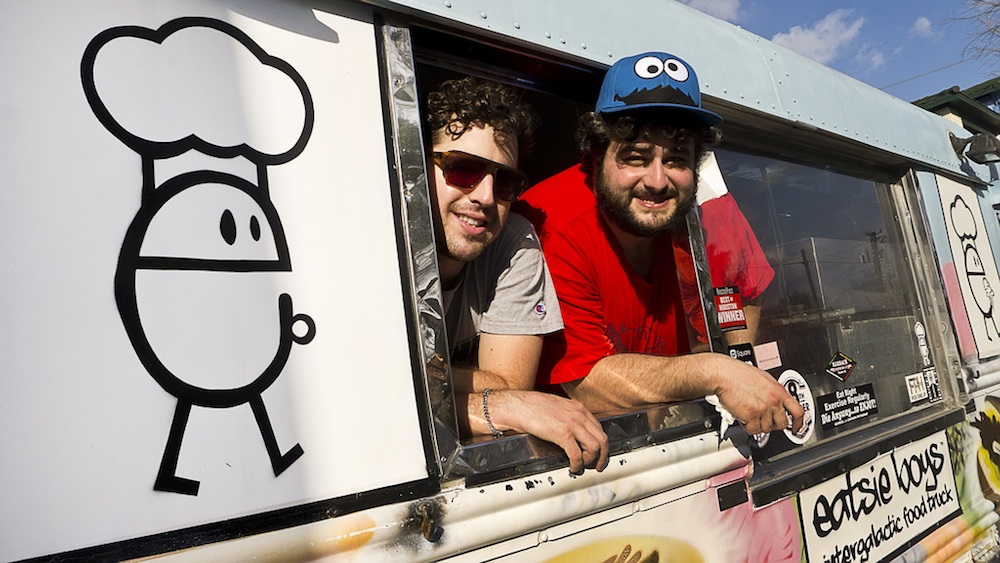 Ryan Soroka and Matt Marcus serving food out of their truck parked in front of Agora. [Gary R Wise]

Walking up to the Eatsie Boys food truck, most often parked in front of Agora, chef Matt Marcus' bright blue Cookie Monster hat is visible from a distance. The truck rolled into Montrose just over a year ago, and since then an entire mobile food movement has blossomed around them. Marcus and his co-owners Ryan Soroka and Alex Vassilakidis have become leaders in a growing and tight-knit small business community all while maintaining a playful fraternal bond evident in their style and food.

The E-Boys spoke with Eater about their hopes for the future of their truck and their upcoming brewery, the importance of Twitter and Facebook and just what they've spent their earnings on since opening in December 2010.

What is your proudest accomplishment?
Matt: There were two amazing moments, for me at least. The first was winning the Saint Arnold One Pot Showdown, which we're about to defend again at the end of this month. Alex: THREE-PEAT Matt: No, two-peat. Alex: Oh, two-peat. Matt: And of course, winning Best Food Truck at the My Table awards. Ryan: One Pot kind of launched us though; that was the catalyst. Then My Table was the cherry on top. Matt: We won with a Lawn and Sea Stew and it was Texas chorizo and Pacific mussels with Lawnmower beer. This year is going to be better than last year's stew and we will be the first back-to-back champions.
Alex: We're not making a stew at all. We're making popsicles. We're going to reinvent the way people eat soup.

What would you say was your biggest challenge?
Ryan: Just the day-to-day rigors with the truck. The mechanical issues, the weather, the traffic. But by locking down this spot at Agora we've done our best to minimize this. Matt: Dealing with customers one-on-one has been a huge thing for us. Making top-quality food and keeping consistent. And keeping it fun. That's tough.

Do you ever have doubts about the truck?
Matt: The truck was never an end-all, be-all. We were never just a food truck company and that's it. We want to grow and expand. We started out last year with just a trailer and now we have a brand new bus. Ryan: And now we have a catering business. It's picked up a lot for private events and parties. We are looking for a bricks and sticks place one day. The truck made sense for us, we came into the market before it became super saturated and we knew it would be a platform for Matt to show his culinary prowess. And it's been a platform to launch 8th Wonder Brewing.

What are your plans for the brewery?
Ryan: We're going to make it a new kind of brewpub by parking the Eatsie Boys outside of it. We want to make it a game day destination. We have our state permits and are receiving our commercial equipment in March and hope to have some product out around then. It's been about three years in the making.

One thing I've noticed is that food trucks are very supportive of each other.
Ryan: Getting started is an overwhelming process but there are a lot of people there to help you and guide you and look out for each other day to day. We're all small business owners and trying to help. Matt: Yeah, and Twitter and Facebook are such community driven things and for food trucks specifically, it's our life blood. We had a meeting a year ago for all the food trucks and there were about eight of us there. Recently, about a month or two ago, there were almost 30 different trucks there. To be considered one of the godfathers of a budding industry is flattering. Ryan: Yeah and we've had people help us along the way and we hope we've done that for others.

What is your signature or favorite dish?
Matt: Our Frank the Pretzel, which is a chicken poblano sausage on a pretzel bun with grilled onions and homemade mustard. And our pork Snuggies are steamed Asian buns with pork belly in the middle. Snug life! Snug life!
[Ryan leaves to help customers and Matt goes off to turn the propane back on.]
Alex: Things are always missing and broken. We're at 50% every day that we operate. Like only half the things that should be working are working, but we can live with that now. Before we were always panicking about stuff. Now, we expect it. It's fine. We know things.

Any last words?
Matt: All our food truck money went to scooters, son! Tell people that.

For more One Year In posts published today across the Eater Universe, head over to Eater National.