A Shift With Yael Vengroff of Grand Prize Bar

Share All sharing options for: A Shift With Yael Vengroff of Grand Prize Bar

In honor of Cocktail Week 2012, Eater contributor Rachel Brill spent an evening behind the bar at Grand Prize with cocktail mastermind and Houston native, Yael Vengroff. Vengroff's journey began in New York in 2005 when she started working at a sports bar to make some extra money while attending NYU. Dissatisfied with her job, she explored other opportunities at both fine dining establishments and night clubs. Ready to give up on the industry entirely, Vengroff accepted a job at Tailor (a new American lounge in SoHo) and finally found her spark; she discovered that bartending could be more of an art than a service. Many cocktails, a few new positions, and lots of networking later, Vengroff is now considered one of the best female bartenders in the country, having twice won the national Speed Rack competition.

Vengroff returned to Houston after a six-month stint in Mumbai where she was responsible for the development of a new bar. Although she recently departed for Los Angeles, she made her mark at 13 Celsius, Mongoose versus Cobra, Fitzgerald's, and Grand Prize Bar (where this tale continues).

So, I have done this a couple of times. And by this, I mean shadowing an employee of a restaurant (line chef, pizza ninja, server, etc.). Typically I am just that: a shadow. About 15 minutes into my shift, I knew this was going to be a different story. Yael defined the soda gun buttons, prescribed the number of seconds to pour the liquor, taught me how to use the computer, and set me free. A woman approached the bar and ordered a vodka soda with lime. Yael nodded to indicate that it was all me.

"It can't get any easier than that," I thought to myself. WRONG!

"Which cup do I use for a vodka soda?"

"Do I add the ice before or after I pour the liquor?" I poured the liquor.

"Wow, this bottle is really heavy," I quickly realized. I also quickly realized that if the pourer is facing the wrong direction you make a really big mess. My appreciation for bartenders had skyrocketed by the time I barely assembled half a vodka soda.

As the night progressed, I elected myself the token beer grabber, as this was far less challenging than mixed drinks. In between customers Yael explained different facets of cocktail-making. She instructed me on the different jigger measurements, the importance of block ice, and how to properly smell the different types of bitters by rubbing a few drops together between your hands.

As luck would have it, two of my friends entered the bar and ordered two different cocktails. Because they were my friends (read: time was on our side), Yael used this opportunity to coach me through my inaugural drinks. We set up two halves of the shakers and pulled all of the necessary ingredients from the back of the bar.

Because I was obviously new at this, Yael plugged some magic into the computer and printed the two recipes on receipt tape. Yael instructed that the goal is only to pick up each ingredient one time when making multiple cocktails. However, because of my newb status, we stuck with one drink at a time. One by one I methodically added each ingredient. Yael identified the fresh ingredients available under the bar and the importance of not over-muddling the basil. A few playful eye rolls from my friends later, I was ready to start shaking. 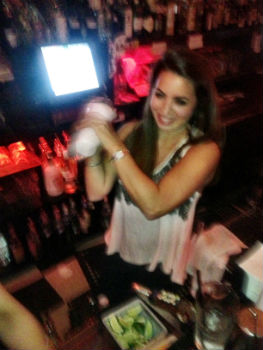 "There is NO WAY I look as cool as real bartenders do," I embarrassingly thought to myself as I shook the first shaker. I quickly asked Yael, "How much longer?" My arm was throbbing. I realized that if I were to ever permanently change professions, I would definitely need to start lifting weights. Also, something I had never considered was how freakishly cold those metal shakers get. Not only was my inadequate arm throbbing from the intense activity, my hands were numb. Yael finally relieved me from shaking because I am pretty sure I started to visibly show pain.

All we had left was to pull apart the shakers and transfer the beverages into the appropriate glassware. I thought we were in the home stretch until I realized that it is physically impossible to separate a cocktail shaker. Maybe that's an over exaggeration, but I tried a dozen times throughout the course of the night to no avail. I conceded to Yael, who elegantly slammed the flat part of her wrist against the bottom half of the shaker which, in turn, released the top. I was in awe and confirmed to myself that I definitely need to start working out. I poured the drinks and, approximately 20 minutes after they ordered, served them to my friends.

While I was having a blast learning the ins and outs of Yael's talents, the majority of the night's customers didn't sign up for the beginner's class. So with my new-found appreciation for the attention to detail, concentration, and physical endurance required for bartending, I spent the rest of the night as an admiring spectator. With each cocktail she prepared, Yael would narrate the process and describe the qualities of the various ingredients. As she stirred a cocktail with the long, skinny spoon she explained the multiple purposes; blending the ingredients, chilling the cocktail, and introducing the proper level of dilution. As Yael explained her stirring technique, one of the other bartenders casually listened in to glean some tips from her expertise.

The rest of the shift included a plethora of other lessons such as a segment on egg whites and the opportunity to sample one of Yael's own creations (the ok go! which includes cognac, scotch, lemon juice, St. Germain, Angostura bitters, and green cardamom). As the shift came to a close, I can honestly say that my perception of bartending had been dramatically affected. And I only lasted until midnight.