Welcome to One Year In, a feature in which Eater Houston sits down for a chat with the chefs and owners of restaurants and bars celebrating their one year anniversary (plus or minus a few months). 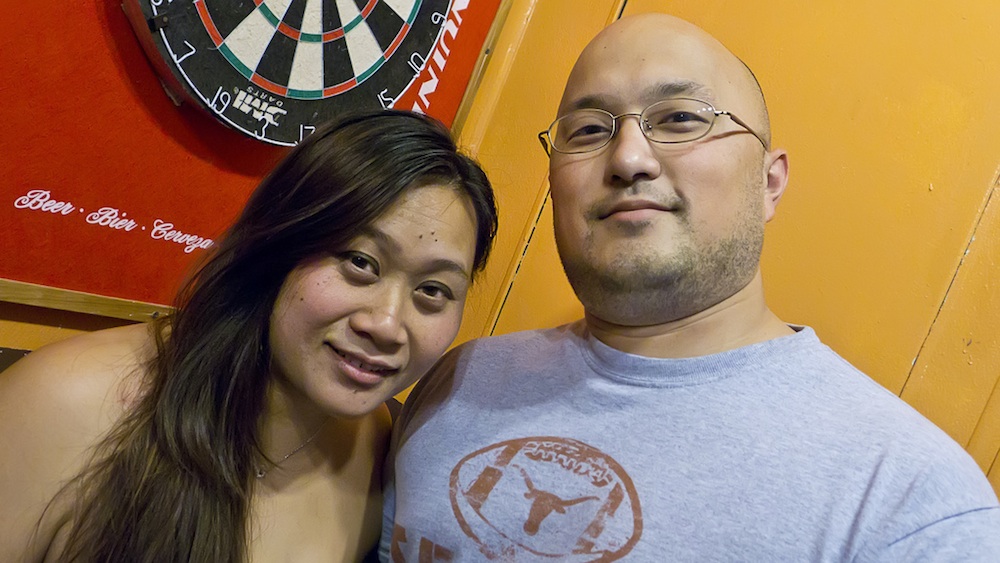 Cuc Roettele is a busy woman, but working a full time corporate job and owning a neighborhood bar for the last year hasn't dampened her cheery demeanor. In fact, her bubbly personality and the-glass-is-half-full (of liquor) attitude are probably large factors contributing to the success of Three Sheets Bar & Grill, where nearly everyone that comes in for a visit ends up becoming a regular. Even Yelpers don't have many negative things to say about the place.

Roettele took a break from her 24/7 schedule and talked to Eater about the origin of the phrase "three sheets to the wind," how one group of college girls launched their now-famous steak nights and the fact that sometimes relationships aren't meant to withstand the stress of opening a bar.

Give us some background on Three Sheets Bar & Grill.
It's something that my partner [Adam Lee] and I started about a year ago. We actually opened on Super Bowl, February 6 of last year. We always wanted our own business and he's got a lot of restaurant background. He's managed at several different restaurants around town here, since the age of 17. And I've been a teacher, and I have a full time job, actually. I work in IT for Siemens. So I do this and I also have to dish wash.

We wanted our own business, we wanted something special, and we found this place. It was like, a mile and a half from where I was living. We were very fortunate to find something we could afford. We just got started working on remodeling and thought up the name. There was an English guy that actually came in two weeks after we opened and said, "How did you guys end up with a name like Three Sheets?" And then he gave us a quick history lesson on where the phrase "three sheets" comes from. So, back in the 1600's whenever the British navy would go out to sea, they would have these big ships with 20 some-odd sails on them, and they called their sails "sheets." So, if they were stuck in a storm, they would have to start bringing down their sheets. So, if you saw a boat with only three sheets up, it meant that they were screwed.

So, you still work, Monday through Friday at your day job?
Yes. I'm very fortunate, because my company is very flexible and they let me work from home three days a week. So, I'm actually in the bar helping with inventory and supplies and cleaning and setting up and cooking the dinner special and all that. I still do that all through the week.

You cook all the dinners too?
Yes, I do. Well, my partner and I both do. He's learning a lot of the recipes so that I don't have to do it all the time. We do a dinner special every night. Monday is "lotsa pasta," we always do an Italian dish like spaghetti or lasagna. Tuesday is "what's crockin" cause we'll do something in the crockpot: beef stew, chicken and dumplings, curry chicken. Wednesday is our "kung food" night. We do an Asian dish like lemongrass chicken or beef and broccoli or something like that. Thursday is our steak night. We do a 14 - 15 oz. ribeye with a baked potato and nice sides. Fridays are fajita Fridays. Saturday is on the grill, brats, hot dogs, things like that. Sunday is manager's special.

Getting back to steak night. Steak night started off really slow and we didn't know how to get people in here. You can get a steak at any bar, they have it everywhere. For whatever reason, the way I marinate my steak, it's kinda Asian. And we had a couple of Asian girls come in from U of H and they loved it. So, the next steak night they came in and brought 30 of their friends. Literally 30 of their friends, 30 Asian people at the bar. So, it's become Asian steak night. And that's been really, really wonderful. We sell 40 - 50 steaks every Thursday.

It only took one group of girls to get things going?
Yes, that and word of mouth. It's been so great. I'm a big Facebooker and a big Yelper and that's really helped. We had some really good Yelp reviews online. And during the week, we'll get at least a dozen people come in and say, "hey, I read a really good review on Yelp about you guys and we really wanted to come in and try it." I can't thank Yelp enough. We did that and we had the Houston Press come in about a month or two months after we opened and we got a great write up in the Houston Press, and that's kind of been our launching pad. But it's still a dive bar. You walk in, and I've heard several times, "it's like being in my best friend's basement." So we are a dive bar.

Does your partner Adam have a day job as well?
No, Adam is the general manager. He takes care of the finances, all the ordering and all that stuff for me now. He's there from open to close almost every night.

Since it's been open a year, do you think you're at a point where you can take it on full time?
Quit my day job? Whenever you start something like this, it's so nice that I have that income to sustain myself, because we're still trying to get there and trying to make it. You know, first year is definitely really hard and you're still trying to figure out how much supply to keep on hand, how much to spend on your liquor. We've put a lot into it, and we're in the black. This is probably the first month that we're in the black, but you know, it can only get better from here. Knowing that, I keep thinking about taking another step back from the bar and leaving more of the reigns to Adam, because he's been really wonderful. This is his calling. I love to see him thriving like this and I could probably work more [in the day job]. I love my day job too.

How did you and Adam meet?
Adam and I used to date. We've been in a relationship for about five years. And we're really good friends, we really care about each other. A lot of people come into the bar asking, "is that your husband, is that your wife?" We laugh about it, but we're not together anymore.

Were you "together" when you started the bar?
Together? Yes.

How has that complicated things? It had to in some ways, right?
You know, we worked so much, the two of us. At a certain point, we had spent so much time together, that it wasn't working out. Something had to give, and we loved the business so much and wanted this so badly that we knew our relationship was strong enough that we could remain friends. It's actually so much better now. We don't have to deal with all the relationship stuff and focus on what's important.

How would you describe the bar in three words?
Three words. Oh gosh. Dive, friendly...oh man, I don't know...family. Our regulars feel like they're a part of a family, like they're a part of something really special. I think that's something a lot of places never get to see and we've been so fortunate to have found the right mix of people that come in and want to be around us. It's luck.

For more One Year In posts published today across the Eater Universe, head over to Eater National.