Minh Nguyen of Cafe TH on Growing up in a Small Town, a New Orleans Location and Cooking Italian

Share All sharing options for: Minh Nguyen of Cafe TH on Growing up in a Small Town, a New Orleans Location and Cooking Italian

Welcome to The Gatekeepers, in which Eater roams the city meeting the fine ladies and gentlemen who stand between you and some of your favorite hard-to-get tables. 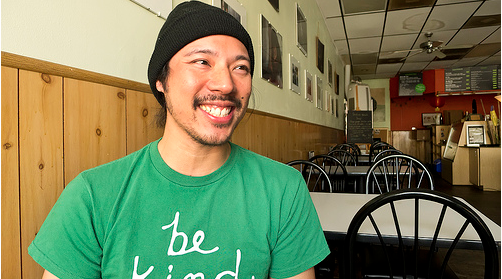 Minh Nguyen of Cafe TH has garnered a reputation for being one of the city's warmest and most sociable hosts at his east downtown pho and banh mi shop, but growing up as a shy kid in Nederland, Texas, it's a lifestyle he couldn't have imagined. Despite becoming a chef in a year's time, opening two restaurants and growing with the Houston food community, he still doesn't feel like he's met his expectations for himself.

Nguyen spoke with Eater about leaving corporate America behind, an affiliated New Orleans location and what made him want to stay in Houston.

Tell us about growing up in Nederland.
I was pretty much the only Asian kid. I didn't really go out that much because my parents are very strict. It was mostly Caucasians and I was very "white-washed." I didn't even have much of an identity, but I did go to Sunday classes to learn to read and write Vietnamese in Orange, Texas. Initially, I wasn't happy to move to Houston because I was so shy. Towards the end of my 8th grade year, I started coming out of my shell and had friends. When my parents told me we were moving to Houston, which was the start of my high school year, I was kind of distraught.

The landlord of this building said she knew a business that was selling, and when she named the place I was like, "God, that sounds like the banh mi shop I used to go to." So when I came in, the lady asked if I wanted my regular and I said, "No, I'm here to talk to you about selling your shop." She said, "I don't know if this if for you," and I said I just wanted to see how it is. As soon as I came in, I was pretty much sold. I just didn't know what I was getting myself into. That's how badly I didn't want to go back.

Did you always cook? Was it food that drew you to this profession?
I did cook, Italian food. I liked cooking, but I just didn't think that I'd be a chef or cook, ever. When I offered to buy this place, they were like, "Oh, great! Where's your mom? Where's your dad?" I said, no I'm here by myself. They were like, "Wow, there's no way we can sell it to you. It's so much work." So they offered to have me pay for half of it, and learn as much as I can for a full year and go from there.

I was concentrating on cooking and then I changed the recipes around. I never thought I'd be cooking Vietnamese food. I have a very good palate for Vietnamese food, so that was very helpful because when they were teaching me, they were just throwing it all in and going by taste.

Do you prefer the cooking or the hosting aspect of the job?
They kind of go hand in hand. My favorite is just meeting new people, but if the food is not good, the experience with them will not be good.

So you have the Café TH Express in the Fiesta. Do you have any other extensions planned?
When the original partners left, I had to find someone else to help run the restaurant. Kim, an ex-girlfriend, wanted to get out of her job and so I offered to have her partner with me here because there was no way for me to learn to cook and be in the front at the same time. I just literally stayed in the kitchen for a year. Our idea was to expand and have multiple locations and once we were okay with the efficiency and the food here, we thought we were ready to do the Express concept in the Fiesta. So when we opened that, Kim went over there and owned that.

We went to New Orleans together, and I fell in love with the city. Kim's mother had a little po'boy shop and they wanted to sell it. It was off of Magazine St. I was like "Man, with the rent being how it was and the area, we have to have this. I am willing to move here." But then who would run our restaurants? I was like, "I don't care, I'm going to make it happen." So that's how my brother bought the Fiesta location from Kim, and she took over New Orleans. I'm consulting and she's not open yet, but she's learning how to cook and their major project right now is renovation.

Do you want to leave? Do you want to move to New Orleans?
No, no. Now, I'm so excited about Houston. Ever since we got written up by Katharine Shilcutt, I've been meeting so many different people. Chefs come in, and I talk to them. And Houston has always been known for good food, good ethnic food and diversity, but not for chefs, like Chicago or New York. Now we have that. Before I was in my own pod, thinking that if I just concentrate on what I do, I don't need to worry. And I think that's why I wanted to leave--because I was in my own little world. But after meeting people in the industry, it's opened my eyes. Houston is going through a growth spurt. And the community is so supportive.

Eventually I do want to open in Austin and I still don't have this place the way I want it. I want it to look less...less...hole-ish?

Do you have anything to say to the single women out there who voted for you for Eater's hottest chef?
[Giggles.] Uh, Happy Valentine's Day?

For more Gatekeepers published today from across the Eater Universe, head over to Eater National.