Share All sharing options for: Proposal Goes Awry in a Crowded Restaurant Lounge

A Decent Proposal is a new feature detailing the stories of engagements that begin inside Houston bars and restaurants. Have a story, old or new, romantic or rotten? Send it our way. 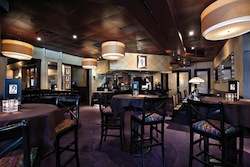 "Jeff," a former employee at the Clear Lake location of Perry's Steakhouse, recounts a not-so-smooth proposal a few years ago.

This tale of slightly tragic public awkwardness took place in a crowded lounge one evening and ended with a refused congratulatory kiss. Why and how did it go off track? "Jeff" gives us his view of the situation.

My restaurant had this lounge area with a live 3 piece band that played on weekends. So one Friday morning this man in his late 40's comes in and asks for the manager. He has this elaborate plan for proposing to his lucky lady. He requests a specific song for our pianist to play at a certain time. When the song plays, this was his cue to propose.

So, fast forward to that night, the song comes on and he does something unexpected. He bellows out for the attention of the (packed) lounge, then proceeds to go on a 5-minute history of their relationship followed by a clumsy proposal. It was plainly obvious she was horrified. As were the rest of the guests. She awkwardly said yes then refuses his kiss. The band starts back up and everyone went back to eating and drinking. I think he was expecting applause or at least nods of admiration.

We wish them many years of awkward marital bliss.

· A Decent Proposal Series on Eater Houston [EHOU]
The scene of the proposal. [Perry's Steakhouse/Official Site]