Share All sharing options for: Hubcap Grill's Mediocre Review Sets Off a Shitstorm

A writer for national food blog, A Hamburger Today, was unimpressed with Houston burger darling Hubcap Grill in downtown.

The writer, Ewan Macdonald, hailing from Dallas (which explains why he was able to get to Houston for the story) by way of Scotland, was first charmed by the casual, very burger joint-like atmosphere and "wanted to love the burger itself" but "left merely liking it."

Citing "patties [that] were simply bland" and later concluding that "in the end it was mouthful after mouthful of insipid beef and yellow mustard," Macdonald ended up feeling "distinctly underwhelmed" by the whole experience.

Of course, Hubcap owner Ricky Craig is never one to take criticism lying down so it wasn't long before his response came down the wire through the @Hubcap_Grill Twitter account. And what a response it was.

The series of tweets:

9:46 p.m.
"Hey Ewan MacDonald from ' A Hamburger Today ' YOU HAVE POOR/ NO TASTE BUDS. FUCK YOU & YOUR BLOG U WANNA BE FOOD CRITIC. BITCH"

9:50 p.m.
"Ewan MacDonald get out of Houston and GO BACK TO DALLAS YOU FUCKER"

9:54 p.m.
"Better yet Ewan Macdonald come to 19th you wanna be fake no taste buds food critiic so I can kick your sorry ass all up n down 19th"

-skipping a few here for the sake of brevity-

10:15 p.m.
"Asshole Ewan McDonald. Your on my turf you Scotland no taste bud punk ass"

-he then proceeds to tell someone that responds to him, "that behavior is unprofessional," to unfollow him and "piss off"- 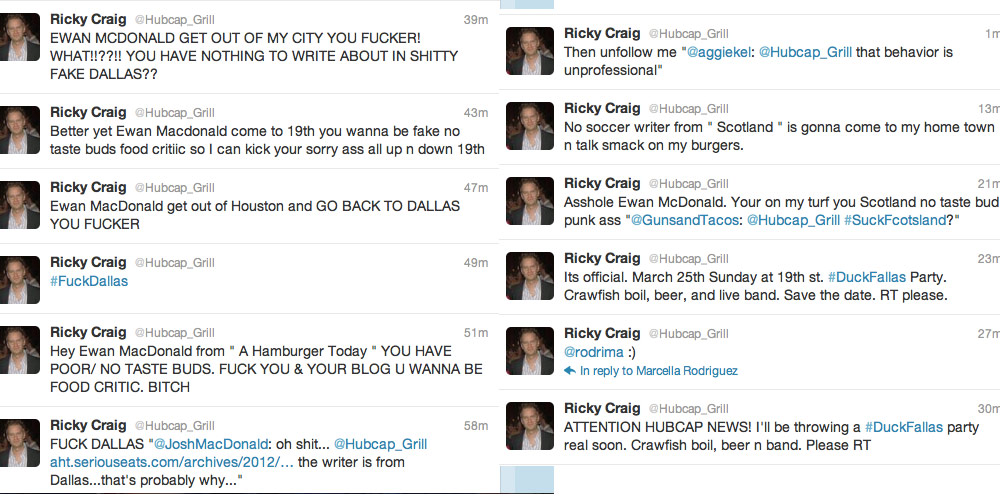