Bun B on His Love for Houston Food Trucks

Share All sharing options for: Bun B on His Love for Houston Food Trucks 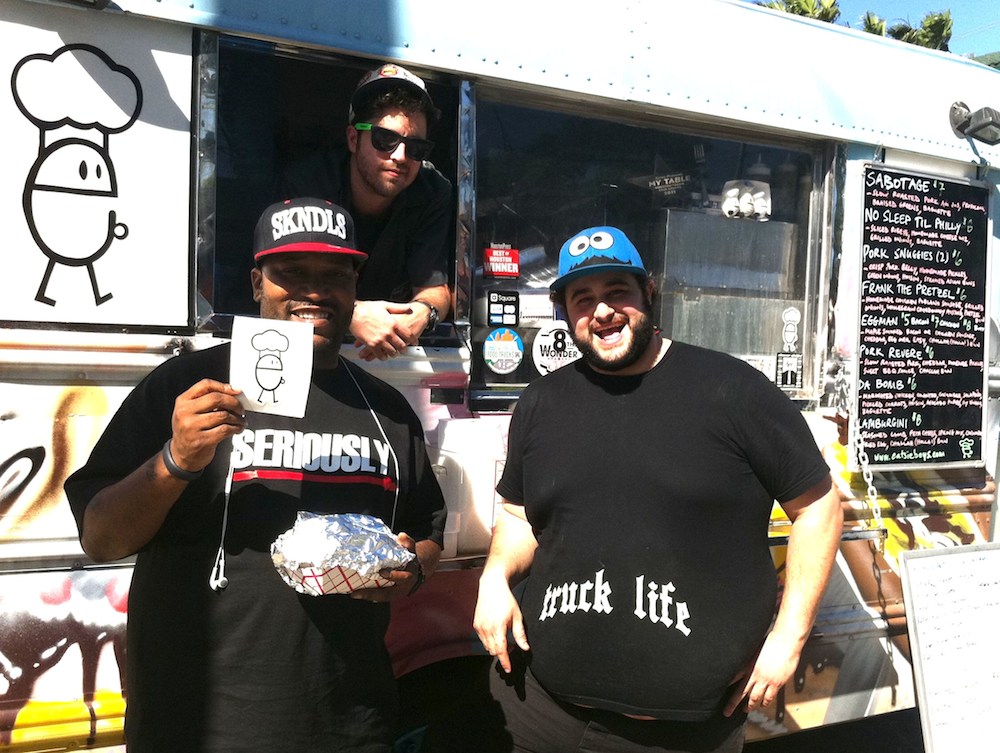 If you follow Houston rapper Bun B on Twitter, then you know that he's a big supporter of food trucks. He's lecturing about hip hop and religion at Rice University again this fall and started taping "Bun's Beat" segments for NewsFix Houston, but he still always has time to tweet a truck recommendation or supportive shout-out.

Bun B sat down with Eater Houston over some pork Snuggies from the Eatsie Boys to talk about just why he loves food trucks so much, the tough city regulations they deal with and whether he considers himself a "food person."

How many times a week do you eat at a food truck?
I'd say at least once a week, depending on what certain guys are cooking. Maybe as often as three times a week.

When did you first get into food trucks?
My first food truck was the Eatsie Boys. They were out in front of Fitzgerald's one night, I was hungry anyway and contemplating going across the street to BB's. Then I saw the line of people outside the truck so I went over to see what was going on and they had some hot stuff but then they had the ice cream. My wife was like, "Ice cream? At night? From a truck?" It was really interesting so we tried the ice cream and it was really good. So I came back to Fitzgerald's a few days later to see if they were out there. They weren't, but the Modular was out there so I tried that and I started following everybody online. I end up at Oh My Gogi, I end up at Bernie's Burger Bus, just all over the city at so many great places. And it's not what people normally equate with food trucks as far as basically just being fast comfort food. A lot of these people are going to great pains to deliver quality meals to people. My wife calls it "gourmet-to-go" and I think that's the perfect description.

There isn't anything you can get from a restaurant in Houston, outside of sushi, that you can't get at a food truck. I mean, the Modular is doing lobster and risotto. These guys are doing pork belly on the bun. They're putting their best chef foot forward.

Does your wife like food trucks as much as you do?
Not as much as I do. It depends on who's cooking what. She's a big fan of the Modular. They just did a crawfish boil, so we went by and got the last couple pounds of crawfish and we were really happy with that. I kind of like to go to places to get the stuff they normally make. She likes to go when they're doing something special. Sometimes they have the guest chefs who go onto someone else's bus. I just follow Twitter and see who's doing what and go with it.

What are some of your favorite food trucks?
Definitely the Eatsie Boys because of the mix. You don't just get the meal, you get the dessert as well. Love the Waffle Bus. Big fan of Oh My Gogi. I think the Modular has been getting a lot of business from us lately. Nola's 2 Geaux. Their po-boys are really good. The seasoning they put on those things is really good. Bernie's was my favorite for a long time but my waistline started to tell me that I couldn't be eating Homerooms everyday. But I try to frequent each one equally because they all have something to offer and it just depends on what side of town we're in and what kind of mood we're in. You can't really lose with the trucks in Houston.

Do you make it a point to try new food trucks? There are so many now.
Well, what happens is that the guys will recommend you. They'll say, "Hey, have you been to so-and-so's truck? He's got something crazy going on." So you go over there. One of the guys I always see at other trucks is Panda, who has his own great truck Phamily Bites. Panda will always let you know, "What are you doing Bun? You need to go try this."

Do you keep up with the struggle the food truck guys are having with the city regulations?
Yeah, around the time I started getting to know the guys was when I was honored with a day from the Mayor. So they were saying, "Hey man, if you get some influence down there in City Hall, ask them to lift the restrictions." So I started asked people, "What is the hard part of running a food truck?" And they said setting up shop. You know, the prep work is okay, being prepared to handle the customers and everything is okay but it's really about where they're going to park and serve. The city hasn't been the best at working with these guys on that so hopefully, and I'm not going to say I have any real influence in City Hall, but maybe I can catch somebody on the right day in the right place. Maybe we need to invite some of the city people to come and sit and plead our case. These things happen, hopefully people understand what it is these people are trying to do and what it is this kind of movement brings to a city. They should talk to Austin. Austin works very closely with all the food truck people, providing them with opportunities to sell their wares. Everybody's happy.

Austin has so many truck and it speaks to the fact that the city allows them to run but also gives them more elbow room as far as where they can park. I mean just imagine if there was a food truck park, just one area where everyone could go and park but still close enough to where there's that foot traffic. Hopefully we can find some kind of equivalent to that in Houston. It's also important that the trucks be able to go to different parts of the city and bring this incredible food to people that wouldn't normally get it. Everybody's not coming to Montrose.

So what is it about food trucks that you like so much? You already said the food is great. But what makes it so special?
I think it's the people. I remember being from Port Arthur, Texas and having a dream and not many people had achieved from where I was and you know, just sticking with it and through time watching it growing into something people appreciated. So I can understand these guys trying to build something from the ground up, something that is really their own creation that speaks to them as a person. None of these trucks are the same. They're all different and it's because they're based on the personalities of the people cooking and operating the trucks. I think it's a beautiful thing. You get to not only meet good food but meet good people.

What do you think of the Eatsie Boys moving out of the truck and into a building?
I think it's a nice move. Especially with them being able to expand on what they do because of all the incredible ideas these guys have, they've done a great job of presenting these ideas on the truck but they've got, quite frankly, more, much more than a truck can handle. I think once they get, as they say, the brick and mortar location going people will still love to see the blue psychedelic truck driving around. I hope that as they do get to a location, I hope it does great business, I still wouldn't mind seeing the truck outside of Fitzgerald's or something like that.

Have you been to the Museum of Fine Arts sculpture garden for their food truck lunch yet?
I've been telling my wife that we're going to wake up one day and the King Tut exhibit is going to be gone. We keep saying we're going to go and that's been since October and it leaves in April and now it's March so hopefully one afternoon we'll head over. I applaud the museum for supporting the food trucks. I really do. It doesn't surprise me me, but to the extent that they're doing it it does. I could have seen them doing the one week promotion, but the fact that they've given over their courtyard to food trucks everyday, I think it's a beautiful thing. Like I said, nobody loses when a food truck is in the building. Nobody loses. The building doesn't lose, the truck doesn't lose, the people don't lose.

So what do you think of bigger restaurant groups that do think that food trucks take away from their business?
You can't get mad at food trucks for being smart about their business. I'm sure that a lot of brick and mortar businesses would love to downsize and cut down on overhead. But you can't get mad at these people because they have wherewithal to think ahead. The reality is, if you make good food, people are going to come. If you're complaining about people not coming to your restaurant, don't blame the food truck chefs; maybe blame your chef. That's all I can say. Because there are still places I go to eat that I went to before I started eating at food trucks. I didn't stop going there. The food trucks just give me more options. I think that's a very close-minded opinion. I know it's not just the city. There have to be people making complaints. But at the end of the day, if you make good food, people will come. It's not like there's a food truck in front of Pappadeaux selling the food that Pappadeaux sells, literally making people choose as to whether they want to go inside or outside. These guys are creating their own menus, coming up with original dishes that quite frankly aren't available anywhere else in the city. I don't know anywhere else in Houston where I can get a pork Snuggie that tastes like this.

Do you consider yourself a big food person?
I'm...I'm greedy. I don't think I'm a food connoisseur. My palate is very limited. I'm not big on vegetables, onions, peppers, things like that. So there's a lot of stuff I have to special order as opposed to the way the guys would like to present it. So I don't consider myself that kind of person at all. I just love food and I love to support independent business, so what better place to bring those two things together than your local food truck?

You're from Port Arthur. Where do you like to eat when you're back?
My mom is still there so I go back a lot. There's one in Nederland that's called Sartin's, it's a seafood restaurant. There used to be several, and two of them took big hits during Hurricane Ike. The one in Nederland is sort of the main one and what they do, is you can have all-you-can-eat with fried shrimp, fried crabs, hush puppies, French fries. And as much as you can eat, they just keep that food coming. Also, if you're in the city and want something during the day, you can go to RBJ's, which is a local place and they deliver. It's a soul food restaurant and they'll just deliver it straight to your house and you don't get that a lot. Just imagine pepper steak, spaghetti, pork chops, fried shrimp, hamburgers, all that kind of stuff delivered right to your front porch.