Welcome to One Year In, a feature in which Eater sits down for a chat with the chefs and owners of restaurants celebrating their one year anniversary. 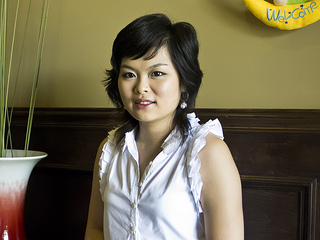 Mala Sichuan Bistro is quiet in the late afternoon. A few scattered tables take advantage of the restaurant's generous lunch specials, lingering over plates of cumin beef and red oil dumplings. That made it the perfect time to catch up with owner Cory Xiong. Mala, named after the numbing sensation that one feels after eating Sichuan peppercorns, has had an impressive first year: racking up ?? in a review from Alison Cook on 29-95 and receiving a very favorable write-up from Houston Press critic Katharine Shilcutt. Time, then, to find out how Xiong helped Mala emerge from the crowded Chinatown dining scene to emerge as one of Houston's best Chinese restaurants.

Xiong begins by talking about how she decided to open Mala. She carefully researched the Houston market and visited other restaurants throughout Chinatown. Through this process, she learned the kinds of foods Chinese Houstonians expect from restaurants and what prices they're willing to pay. Her studies revealed that, while many Chinese restaurants have a Sichuan-style dish or two on the menu, there was room in the market for a restaurant that served a full menu of authentic Sichuan dishes.

She notes that the menu hasn't changed much over the first year, with one notable exception. When the restaurant opened, there were only four dishes utilizing tilapia from the restaurant's fish tank; now there are a dozen. These tilapia dishes have become the restaurant's signature, bringing customers back again and again. "Our tilapia supplier says we buy more tilapia than some of the supermarkets," she brags. "Other restaurants are surprised by the amount of tilapia we serve."

Another dish that sets Mala apart is "Moyu" or "konjac," a gel made from Devil's Tongue that's high in gelatin. The ingredient is popular in Japan, where it is prized as a high-fiber dietary aid. Mala is the only restaurant in Houston that serves this dish.

As for the rest of the menu, Xiong states that the Chinese customers who make up her base are very discrimiating. "Our environment is above average, so we have to serve above average food. Chinese people want [their restaurants to have] good prices, large portions, high quality - good everything" she says with a laugh. Still, despite the fact that other restaurants on Bellaire are cheaper, she says that "I've resisted [lowering prices] and lost some business, but it's more important to me to deliver high quality food."

One specific aspect of this commitment to quality is that Xiong's father flies to China to decide where to source the Sichuan peppercorns that provide the restaurant's dishes with their signature "Mala" sensation. She says that by importing the peppercorns themselves she gets them at "full strength" in contract to the milder fare other restaurants have access to.

There are so many restaurants in Chinatown that non-Chinese people can find it difficult to decide which restaurants to try. Mala's broken through despite only utilizing word of mouth advertising.

Xiong describes the various ways Mala has set itself apart. First, she thanks local blogger Doc Ricky for helping get the word out with this blog post that appeared less than two months after the restaurant opened. Xiong took other steps to build her, as she refers to it, "American" clientele. Mala's menu has clear English descriptions of what each dish contains, and the servers all speak English. Mala set itself apart in another way, too. "A lot of Chinese restaurants are not very clean. We work hard to keep things clean," she notes. In the future, Xiong hopes to expand the tilapia dishes even further and offer more upscale dishes.

Although her father owns a Mala Sichuan restaurant in Dallas, she says she only worked as a server them on summer breaks from the University of Texas. "A lot of my skills, I think, are my own natural ability," she says. She attributes her success to time spent in the Chinese Student and Scholastic Association at UT, noting that "I was involved in the organization. The experience helped me grow a lot."