Hubcap Grill, considered by many to serve Houston's best burgers, has some funny rules that challenge the maxim "the customer is always right." For example, Hubcap won't cut a burger in half. If a customer wants to cut the burger, the staff hands him a knife to cut the burger himself. Maybe not the "your way, right away" ethic of other burger providers, but Ricky Craig, Hubcap Grill's owner, routinely tweets about half hour waits at both locations, which suggests most people don't mind.

However, when a customer objects to a business' practices in 2012, that person usually takes to twitter with his "beef." Former(?) Hubcap Burger customer Mark Baker started a twitter account yesterday solely to complain about Hubcap Grill. As people will recall, Craig does not take complaints kindly and spent the day vigorously defending his restaurant and his policies. Late last night, Baker's wife Crystal also started a twitter account just to criticize Hubcap. 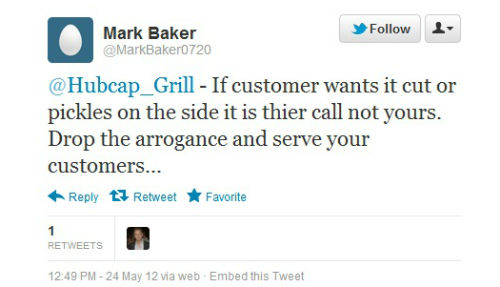 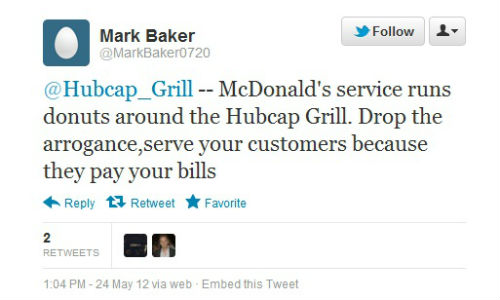 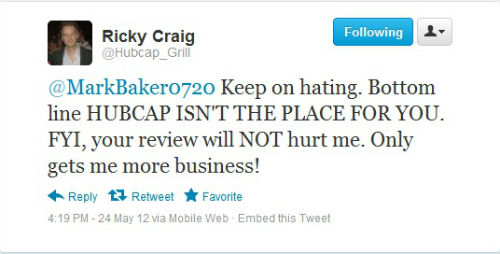 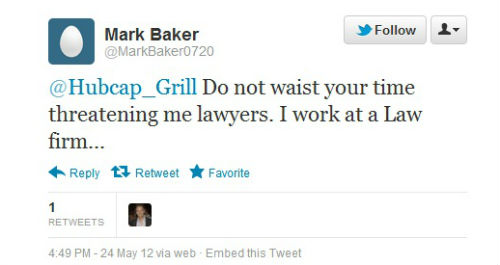 Baker's use of the incorrect homophone had a predictable result, as people who had been observing the exchange jumped in to defend Craig. 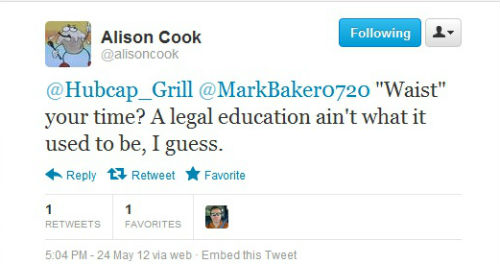 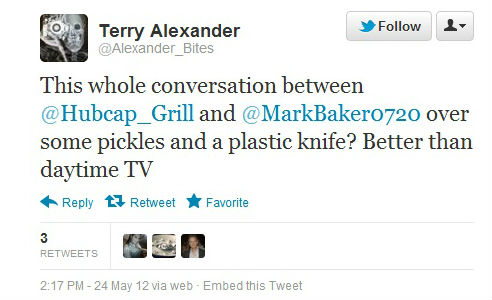 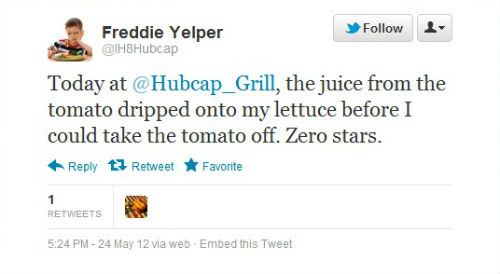 It all seemed to be over until Crystal Baker, Mark's wife, started her own twitter account to defend her husband.

Reached by Eater, Craig makes a passionate defense of his business. Saying that Baker disrupted his restaurant and told his father, "As long as you continue not to cut that burger, I'm gonna write horrible reviews." Craig continues "He's posting false statements. Hubcap Grill is against homeless people. We give food to homeless people all the time. I'm blessed. I'm happy to do that."

Craig appreciates people rushing to his defense on Twitter but doesn't think people should call Baker names, "that has nothing to do with me. I'm against that. I get called names all the time. Sometimes I brush it off but sometimes it hurts."

Craig explains that they won't cut burgers because when they have in the past people would complain that it was cut incorrectly and demand another or want it cut into three or four pieces. To avoid the issue, he leaves a knife available for people to do "whatever they want."

"Sometimes you gotta draw a fine line. These yelps and these reviews are getting out of hand. I've put my foot down. Gordon Ramsay says 'You run your restaurant. Don't let customers run you.' We've run this restaurant for five years. We've been successful."

"We're not a full fledged restaurant with waiters or tables. We're a walk up, counter service burger joint. Sometimes I've gotta draw the line and say 'we don't do that here.'"