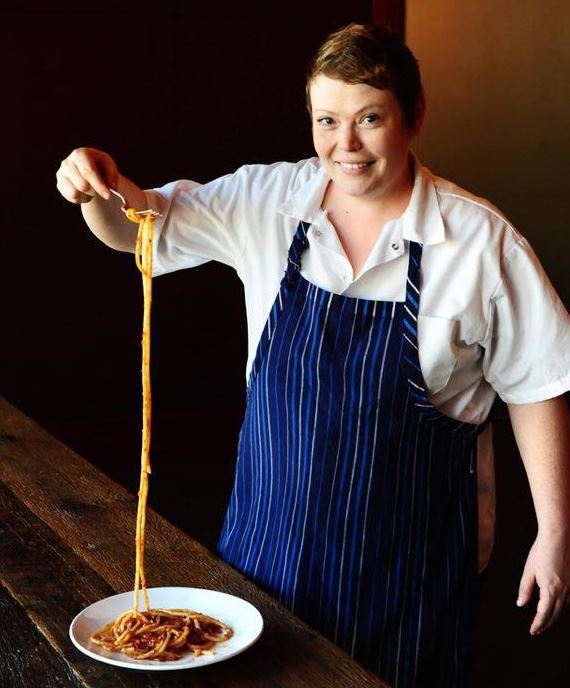 Last year, when Chris Shepherd left Catalan to open Underbelly, owners Charles Clark and Grant Cooper decided to open Italian restaurant Coppa rather than hiring a new chef that would continue cooking Shepherd's unique menu. To bring Coppa to life, Clark and Cooper hired Brandi Key from the Pappas organization. She came in facing high expectation, but so far Key has exceeded them. After a year, Coppa has been extremely well-received. Key's food earned Coppa a nod as one of the 10 Best New Restaurant in Texas from Texas Monthly's Patricia Sharpe. Chronicle critic Alison Cook awarded Coppa one star, and Press critic Katharine Shilcutt considers Coppa one of the best restaurants in Houston.

Key spoke to Eater's Rachel Brill about her first year experiences and what the future holds for Coppa.

What was it like making the transition from Pappas to Coppa? The things that I learned at Pappas, along with the other things in my past set me up perfectly for a position like this. I wouldn't say it was a transition. I would say it was just more responsibility. I am responsible for the menu, the food, and the staffing. All of these decisions are a reflection of myself and have a direct impact on whether or not the restaurant is successful.

What was the most appealing part about accepting this new opportunity? It was two things. The first was the opportunity to be an executive chef and the leader of a kitchen. Second was the food. I really lucked out that what I was looking for and the style of food that I wanted to do matched up perfectly with Grant and Charles' vision for the new restaurant.

Were you nervous about replacing Catalan? Whenever the news came out, there were a lot of questions about me filling Chris Shepherd's shoes and Catalan's space. I never really looked at it that way, because Chris is a really fantastic chef - he's got his own unique style. I really respect him and what he has done for this city and the community. It wasn't about filling his shoes; his shoes are his own, and my shoes are my own. It was more an opportunity to create a new restaurant with a new chef and a new concept. I have my own path that I want to create.

How has the menu changed over the last year? We have updated the menu a couple of times now. The basics of the menu's structure (i.e., small plates, pizzas, pastas) have remained the same; I would just say that it has become more focused. Everything really fits into what we see Coppa being; a lot of inspiration from very classic Italian dishes and desserts from north to south, but it is all done with an incredibly fresh, almost northern California feel to it.

My favorite changes have been in the pasta program specifically. We have brought some amazing classics to the menu and have increased the number of pastas that we make in-house. We now make our own rigatoni and gluten-friendly pastas.

Another significant transformation over the last year has been the increased use of seafood. I love Houston, and one of the main reasons for that is the amount of product that we have that is natural to us. The fact that I can have a supplier call me and offer to deliver fresh fish right from the Gulf is incredible. Italian cuisine is so rich in fish, and it has been nice to be able to represent the culture of Italy with ingredients from Houston's backyard.

What is your favorite item on the menu? That is always a hard one. Right now I would have to say that it is our bucatini cacio e pepe. This dish is the epitome of how Italians eat. The dish showcases something as simple as pasta, cheese, and pepper. It is the simplest thing on our menu, but it is probably the most satisfying when everything is done right. It is just awesome.

What are you making now that you didn't when Coppa first opened? The biggest thing would be the gluten-friendly pastas. We have both a rigatoni and a fettuccini that are gluten-free and then a couple of other shapes for features. We have really focused on having a house-made gluten-friendly option.

Are there any menu items that you thought would work that didn't? There have been a couple. The duck agnolotti dish we did was amazing, but we just didn't sell a whole lot of them. It was really weird. Also, the cappellacci pasta stuffed with braised kale and escarole with pork belly and white beans was our take on pork and beans and greens. It was intended to be a southern dish done in an Italian way, and nobody got it. It finally had to have its day.

In a blog post that accompanied her review, Katharine Shilcutt wrote that food cooked by a woman tastes different than food prepared by a man. Do you agree with her? No. I understand what she is saying, and it is an interesting thing when you start talking about gender and cooking. I understand why some people like really masculine food. For example, Chris Shepherd is a man's man and makes beautiful food with a male energy. I don't think my food tastes any different than any other chef in town because I am a girl. If anything, women just tend to have a thoughtfulness to their cooking (although, men are thoughtful too). I don't know what it is. Some men cook very feminine, and some women can cook very masculine as well. I definitely think my food has a certain lightness and cleanliness to it but I don't necessarily think that is just because I am a female chef.

How do you think a kitchen run by a female chef differs from a kitchen run by a male chef? It doesn't. It is a kitchen, and there are those certain things that have to happen. There is still the scheduling, hiring and firing, and making sure that you have the product that you need. For me personally, I am very organized. I think this is part of the reason that I have been successful. Those organizational skills have to be present in a kitchen. I don';t run my kitchen any differently than any of the chefs that I have worked for, men or women. I run a kitchen and it has nothing to do with that.

What are Charles Clark and Grant Cooper's role in the day-to-day operations of the restaurant? Charles is a co-owner of the restaurant along with Grant, but he is also the executive chef at Ibiza and runs Ibiza day in and day out. One of the interesting things about Clark/Cooper concepts is that their main goal is to find good talent and put those people in the right places. It is meant to be entirely chef driven. Charles runs Ibiza, Amanda runs Brasserie 19 and I run Coppa. With that being said, it's not just me running this place; I have a whole team that I am working with. Rob Grine is the general manager and runs the front of the house. Grant is my guy. If I need anything operationally, it's a tag team between me and him. Grant and Charles have entrusted us to run these restaurants well and make good decisions.

How are you preparing for Coppa's expansion to Rice Village? We definitely already have a property and a vision for that particular location. But I believe in the old adage, "Don't put the cart before the horse." Anything that we do within these four walls (the people that we touch, the food that we create, and the service that we provide) is the foundation and basis for the next Coppa. Right now, my thoughts about who I am going to put over there in terms of staff and the menu is very much in the back of my head right now. I am trying to stay focused on what is going on right here, right now in this restaurant. That is what is going to get me there in the future.

What is the one challenge that you didn't anticipate when you took the job? I have done this for a lot of years now. There wasn't anything that I was really surprised about. I wasn't surprised by the amount of work or the hours; this is not the first restaurant that I have opened. More than anything, it was just the realization of the magnitude of responsibility. I am the person that everyone is going to look up to. If there is something that doesn't work, or something that is wrong, or something happens; it all comes back to me. But the first day that I had to fire someone was when it really hit me that that was my responsibility. It is my name out there, Coppa's name, and Grant and Charles. So it is about representing everyone and making the right decisions.

What are you most proud of having achieved this year? It sounds corny, but just having had this place doing what it's doing over the last year. I have waited over ten years for the opportunity to be the head of a kitchen, write a menu and take care of people. I am incredibly proud of our staff and the people that are here that have gone through this journey with me. I just want to take care of the people of Houston and serve them good food. Just this whole year total with respect to Coppa has been the most rewarding and fulfilling thing that I have ever done in my career.