Share All sharing options for: How Jake Rainey Convinced Me to Stop My Worrying and Learn to Love the Flying Saucer

Chris White is a local beer enthusiast and treasurer of Open the Taps, a political organization that seeks to reform beer laws. You can find more of his writing at Blog of an Aspiring Foodie. 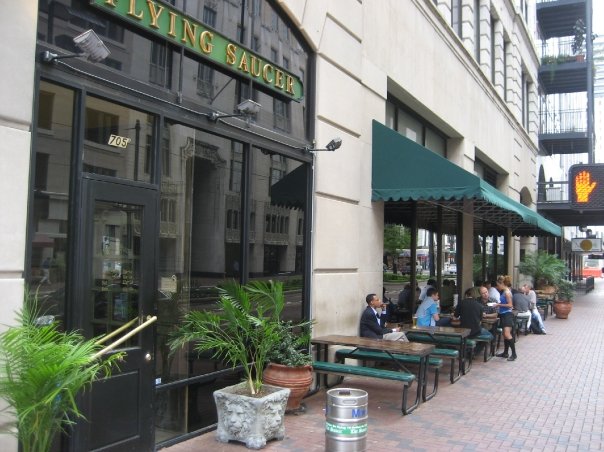 When I think about 'the best' service person I've encountered in Houston a few names come to mind, the individual that has impressed me the most with a mastery of authentic customer service, knowledge of product and an ability to influence those around is Jake Rainey of the Flying Saucer.

Some years ago the Houston Press wrote up a rather glowing review of The Flying Saucer downtown. At the time, I was quite lukewarm to the place, as I had experienced a series of rather terrible visits that had convinced me the establishment was more gimmicky breastaruant than bonafide craft beer destination. I wrote a post about it on my personal blog, listing a dozen other places I would rather drink beer. I posted a little on Twitter - I was just getting going with that platform, like much of the Houston craft beer community - and I think I made a comment on the article on the Press website.

A few days later I had a message on Twitter from Jake Rainey, who offered to hear out my concerns and asking for a chance to show me what had changed at the Saucer. He wasn't argumentative and didn't try to go tit-for-tat with me about my point of view; he just reached out to see what he could do to change my mind. After exchanging some emails, I agreed to come up to the bar and meet him face to face and talk it out. We discussed the changes he had made since taking over as general manager of the Saucer. He gave me a tour of the cold box and explained how he was working with distributors to keep the beer fresh and rotated. He explained his training program for the staff and how he and his management team valued being able to demonstrate knowledge of the products they served. He bought me a beer, and we swapped stories about craft beer experiences in Houston.

I left that day with respect for the man and a new interest in trying out the Saucer again. I now rank the Saucer among my personal favorite destinations and couldn't be more excited about the Sugar Land location which I think has been molded directly by Jake and his leadership team as an even better example of what a craft beer bar can be.

I respect Jake because he reached through the 'easy' option – dismissing me as just another ignorant customer – and showed that he really cared about what I was thinking and why. His approach seems like common sense but really isn't all that common. I have also concluded over many visits to the Saucer since then that he truly is a master at building a strong, consistent and knowledgeable front of house service team, even with the complexity of dealing with what must be significant turnover among his large group of servers. I remain impressed with each visit over the product knowledge the servers and their ability to consult with customers on what they might enjoy.

Over the years Jake has built a reputation in the burgeoning Houston craft beer community as a knowledgeable retailer and saavy operator, which are both labels I think are well deserved. However, I think all of this is built on a foundation of strong service focus and a deep understanding of what that really means when it comes to the nitty gritty of interacting with customers on a day-to-day basis.