Boston's the Gourmet Pizza May Be Gone, but My Memories of Jason's Excellent Service Remain

Share All sharing options for: Boston's the Gourmet Pizza May Be Gone, but My Memories of Jason's Excellent Service Remain

Welcome back to Front and Center: a week-long series dedicated to highlighting excellent Front of House staff. Hank Lewis is the author of Hank on Food, a blog dedicated to documenting the good things happening in Houston's restaurant scene. 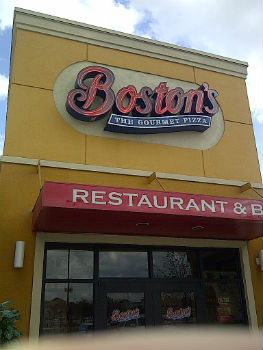 It's sad that as I think of this, the restaurant in question closed down this past May. Granted it's an international chain with locations all over the place. However, the only Houston outpost of Boston's The Gourmet Pizza closed, and it wasn't due to bad service or bad food. It was due to a location in an awkward spot by FM 249 and the AMC 24 Willowbrook that has apparently been one of the cursed locations for restaurants. In any event, my ode is to the staff of Boston's the Gourmet Pizza Willowbrook: most specifically a young man named Jason who ended up being the main person who served me during four different visits.

What stood out regarding Jason during our first visit back in January of 2012 was the fact that he greeted us with a big smile, found a booth that suited me and both my kids, was quick to bring out kids' menus and crayons for my kids, and made sure to get the kids' food started first (they were griping they were hungry a little) while allowing me time to make up my mind. He was also well timed in is call backs (didn't come up when my mouth was full) and refilled our beverages promptly. Jason also had a sense of humor about sharing the same first name as my son; they high fived and had a funny moment. He knew all the specials, referred us to a couple of sources of potential discounts, and recommended some petite servings of their desserts when we couldn't make up our mind on one to try. Jason the server's good nature, friendliness, and smart, timely service earned him a significant tip and two more return visits in February and again in March and April.

On the subsequent visits Jason was just as friendly and as prompt as before. He made some recommendations for other pizzas and dishes to try. I had a flatiron steak flatbread pizza that was just fabulous, based on his recommendation. Even though it seemed Boston's was a little empty, he kept his hustle going and worked hard to earn our business. I will also add on each visit a manager came by to check on us to verify how things were going and each time the manager (different manager each time) indicated what an asset Jason was to Boston's.

I had Boston's the Gourmet Pizza in my monthly rotation, especially because it was close to where I work, and was disappointed when I came by in May after finishing a major project to find it closed and all the signage removed. I don't know where Jason is working these days, if he even is working in the food service business or not. Given his can-do attitude and smart, friendly type of service, I figure that young man is quite successful whatever he is doing. I tip my hat to him for making what would seem to be an ordinary pizza chain a special place for me and my kids.