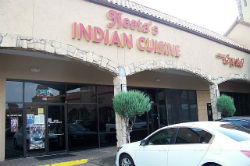 Since the first time I visited Houston years ago, I have known it to be a treasure trove of "ethnic cuisine." The Sharpstown restaurant community boasts some of the best of these offerings and many a group have shared great food under the various awnings reading "Surti," "Indian," "Halal," "Pakistani Cuisine," "Veg and Non Veg Indian" and the like.

We all have our favorite biryani, tika masala, samosas, etc. but to me the overall experiences at many are far too white-bread to for me to call a regular haunt.

A couple months ago this all changed; we walked into Neeta's Indian Cuisine and were greeted with a simple, warm smile and cordial attentiveness from one of the kindest and most endearing gentlemen I've had the pleasure of meeting in this industry—Sabin Shk.

Upon our first visit, he carefully balanced the service to his full section of tables with taking the time to smoothly guide us through the menu by asking our vociferous and voracious group (we're often known to be quite a fun party to take care of despite a little bit of high expectations) what our preferences for specific proteins (lamb, goat, chicken, shrimp, cheese) or veggies were, and then explaining the different spices involved and comparing to other cuisines. Even had his selections, suggestions, and alternatives not been right on point (they were!), the serene disposition and the glowing pride he took in being our culinary tour guide alone were noteworthy.

As dinner went on and each new course came out, Sabin choreographed the table drop with his other servers and glided effortlessly from guest to guest explaining the rituals behind each dish and what accoutrements to incorporate. When Sabin closed out the rest of his tables and we were the last around, he did something special by not doing something—he kept up his quality checks and beverage/table maintenance, not scurrying off to do closing duties or breakdown his section as has bothered me at too many a restaurant recently. When we left extremely pleased, Sabin extended his hand to the gentlemen of the party and asked for everone's names so that he would remember us next time (there have been about 10 next times now). Our entire party left beaming from the food and experience as a whole. One of my closest friends in the industry, who unequivocally disagrees with the emphasis I put on service, turned to me and said, "I finally get it; that man made the experience."

Our recurring experiences since have led us into a more familiar territory with Sabin [and the service (and portions) has even improved, if that was at all possible], and I have gotten not only to witness his dedication to hospitality but have now gotten a small glimpse into his world from the snippets he has provided in our formal conversations. I found that this doesn't just end as a tale of good service; but, rather, his service begets a better story—one of the great American Dream.

The pride that manifests itself in Sabin's work and the radiance of care that ensconces him comes from who he is—a hard-working extremely educated immigrant from the town of Mahapal in Nepal whose passions have led him here to Houston in unwavering dedication of his dream of bringing Nepali cuisine to us. After finishing his technical undergraduate studies and completing his hospitality degree at Nepal Tourism and Hotel Management College, Sabin came to the states to attend Northern Kentucky University for his graduate degree before coming to Houston. He is mastering the waiting game and dedicating himself to learning hands-on everything he can in the restaurant business. While his girlfriend is attending her first semester away at law school, he remains to make Houston not only their home but also the arena in which he will showcase his cultural/culinary heritage.

I am humbled by his presence, ecstatic at his meticulous service, and envious of his dedication and passion. While I doubt I can correctly put into words the beautiful praise that this man deserves, I'll leave you simply with what I just discovered he stated as his religious view on facebook: "god bless everybody in the world."