Jonathan Jones Out at Concepción

Share All sharing options for: Jonathan Jones Out at Concepción 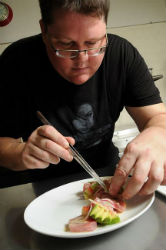 With a post on his Facebook page that reads "Concepción is now Misconception. Anyone need a Chef?", Jonathan Jones announced his departure from the Montrose area restaurant where he had been serving interior Mexican cuisine to raves from diners and critics, including a spot on the Eater Heatmap when the restaurant was still in its soft-opening phase. The move seems sudden given the positive attention Jones brought to the restaurant that had already failed under a different chef under the name Oceans. Less than a month ago, Chronicle critic Alison Cook featured Jones' work as part of her article touting the ways in which Houstonians have embraced ceviche.

No word on Jones' next move, although, given the strength of his following and his popularity on Twitter, he seems likely to land on his feet quickly.