Michelle Smith and Ted Morgan of The Four Seasons

Share All sharing options for: Michelle Smith and Ted Morgan of The Four Seasons

While Houston is home to many luxury hotels, the Four Seasons downtown has always stood out. Located near some of the city's biggest law firms, businesses and sports arenas, it attracts a mix of people from all over the world.

Eater spoke to two of the hotel's concierges about their role in introducing visitors to Houston and fulfilling their various requests. Michelle Smith is the hotel's chief concierge, and Ted Morgan is the self-described "foodie" on her staff. These professionals have to be smart, resourceful and knowledgeable in order to satisfy their clients who pay anywhere from $350 - $3500 per night for their rooms.

Who are the typical guests that come here?
Michelle: A lot of oil and gas, lawyers, celebrities that are here in Houston, performers that are here and athletes. For teams that come to play the Rockets or Astros? M: This is where I would stay if I were them. Do you see that pretty regularly? M: nods

What kind of food and restaurants do guests want to try when they come here? M: They come with the expectation of steak. Texas is a meat and potato place. Ted: And barbecue Where do you typically send them? M: If they don't want to dine in house and have one of chef's steaks, we send them to Vic & Anthony's, Morton's or III Forks, because they're close. Our favorite to send them would be Pappas Bros.
What is your relationship like with Pappas Bros.? Do they keep a couple of reservations open for you? M: They bend over backwards for us. We call them. They will also hold tables. They will fit them in. They usually do a little dessert on behalf of us. That's our go to steakhouse.
Where do you send them for barbecue? T: I live in the Heights area, and that's only about 10 minutes away from here. I'd say the best, hands down in the city is Gatlin's. Super friendly staff over there, and the lady who owns the place will just say "How you doing, sweetie?" Ribs are excellent. Brisket's awesome. A lot of people read about Goode Company, which is very good, but it's very mainstream. Gatlin's is more under the radar.

Years ago, I was in line at The Breakfast Klub. I saw the Town Car with a Four Seasons decal pull up. Three guys in Dallas Mavericks warm-ups got out, cut the line and got breakfast. M: Sounds about right. We don't have a Town Car anymore. We've upgraded. We've got this really cool BMW 7 series we send around. But yes, we go to the Breakfast Klub very frequently.

What do you do to keep track of what's new? Do people come here to go to restaurants they've read about like Oxheart? M: Of course. One of the biggest ones that's making the scene is Underbelly. We call and talk to James. He tries to do whatever he can to take care of our guests. They're foodies when they come. They know what they want. Makes our job easier.

What are the other things people want to see when they come to Houston? M: They shop. They want to see NASA. T: Everyone always wants to see the Space Center.
M: We have a lot of international travelers, so that's really big. They come here for theater and concerts, too. They will come for a specific show. Do you have a lot of people coming in for Lady Gaga? M: Yes, we do. The last big draw was Paul McCartney. A good percentage of people went to that.

It's almost time for the Rodeo. How busy are you for that? M: We are typically sold out as far as occupancy. Do you maintain Rodeo tickets for people? M: We have excellent contacts there. We don't hold tickets. We just call our people and say, can you help us out? They're always really accommodating. They spend a lot of money, you know? They don't mind helping us out, because it's a high dollar ticket. When they come, they're going to spend a lot of money on food and beverage, too.

What are some of the sillier things that people ask for? M: Like some of the weird requests? I guess the first thing that occurred to me is dog walking. Is that pretty standard? M: Yep. We do a lot of dog walking, but it's easy now because there's the park across the street.

T: Some of the weird requests typically come from guests traveling from the Middle East that have an obscene amount of money. I get a lot of interesting requests from those people. I remember a guest in particular, whatever he was watching on TV, he wanted that. If he was watching a TV show about private jets... M: He wanted an air boat, a Hummer. T: Whatever he saw on TV was what he wanted. It was kind of interesting. It's fun getting those kinds of requests. People for whom money's not an object.

Do people ask for helping buying cars? M: We've shipped Rolls overseas. We've asked the Galleria to stay open just so they can shop themselves.Is that just one of those things where, as long as someone's willing to pay overtime for the security guards and the staff.... M: All that stuff. My other concierge. This family had their own 747. They had 10 U-Haul trucks filled with stuff that they bought while they were here. He had to drive these 10 U-Hauls onto the back of the 747.

How do you calculate the fee for that? T: Add it all up, the U-Hauls *laughs* M: The thing about us is, it's just a service. We just hoping to (smacks palm). Get a little kickback. It's not like we can say "We're going to charge you X amount." It's a service that we have to provide. Literally, we can't say no to a guest unless it's illegal or immoral. That's it.

What's an example of something that's immoral but not illegal? M: That's a good question ? I can't think of something. We really do say yes to everything. T: If somebody wants company for the evening, we say, "I'm sorry, sir. We can't do that." M: Just pass them the Houston Press and say "Page 32." (laughs) T: You can look it up. (laughs)

Is that the request you say no to the most often? T: Definitely, yeah.
M: Even on the flip side, there are people that will call us and say, "Hey, do you see any single guys at the bar?" Even the reverse side of it. 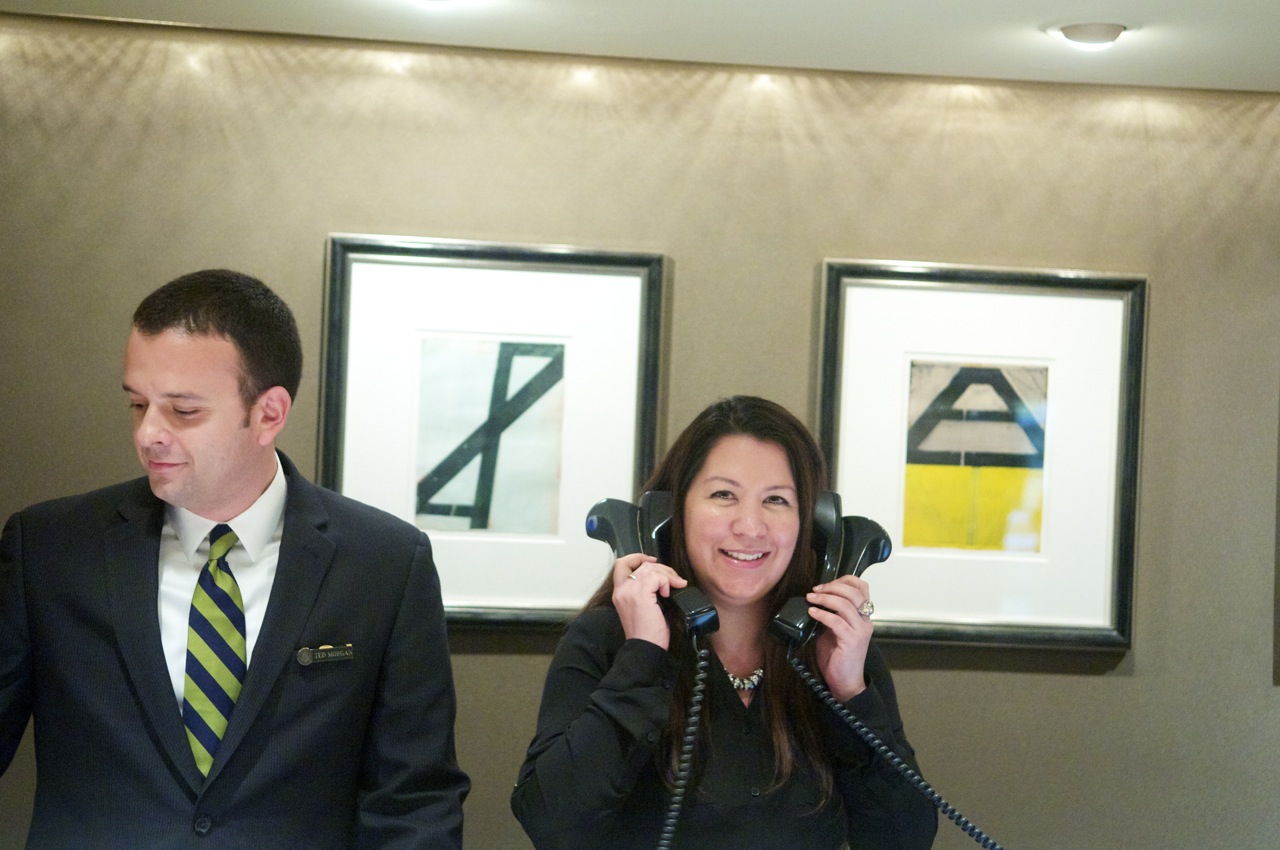 What's the last thing you said no to? T: A basic thing we have to say no to is if a concert's completely sold out. There's just no way we can get tickets, but 9 times out of 10 we can. M: The only question we get asked a lot that we have to say no to is escorts. T: I've never been asked for drugs or anything like that. People typically know not to ask a hotel employee for that. M: It's usually not the people behind the desk that they'd ask those questions. It's the people they're interacting with like doormen or bellmen.

Who's the biggest celebrity to stay here in the last six months? M: I can't do that. (Laughs)

T: This is legal, but I had to say no to, because it was (inappropriate). A guest that was staying here long-term wanted me to order DVDs off Amazon. They were of an adult nature. At first, I didn't really know what they were. I was, like, whatever, I'll order them. Then he was, like, I need you to put them in a black bag when you hand them to me, because my wife is staying with me, blah, blah, blah. Once I caught on to this I said I can't do this. I explained to him you can set up your own account with Amazon and ship them here, but, unfortunately, I can't do it for you. Did he give you a list of titles? T: Yes (laughs). There's an example of something that's legal that we had to say no to.

M: We do silly things, too. This one lady guest thought there were demons in her room. We had to do life-sized cutouts of the Virgin Mary and place them all around her room for her, so she was protected and safe. How did you make them? We got an image and took it over to our graphics place.How many did she need to feel safe? We made a dozen. I just found one the other day. It's taller than I am. She left the door open and had a little sign inviting people in if they wanted a safe spot.

Do you maintain contacts with the other conceirges around town and trade war stories? M: We actually get together once a month. We have a little association and say "oh, this guest just asked me for that." You meet for drinks? M: It's part of the hospitality scene. We get together and throw a few back. (laughs)

What do you think about the state of the downtown bar and restaurant scene? Are you optimistic? Do you feel like it's growing? Was losing the Strip House hard? M: That was our go to everything, but Pappas is coming, so I'm excited about that. I am optimistic. It's booming down here. I think Fingers is opening three more high rises. As long as we keep getting residents downtown, I think things will stick around. I remember when I first started working eight years ago we had one list of restaurants. Every single restaurant that was down here fit on one page. Now we have many pages. I'm optimistic.