Editor markup for Houston - Cottonwood Bar . This is only visible in the story editor.

When Cottonwood opened its doors one year ago, people weren't sure what to expect – was it a restaurant or a bar? Over the year, it's turned out to be both an award-wining food establishment and highly praised craft beer bar, as well as a gathering place for the community. With a mind focused on food and a heart dedicated to pouring quality brews, the young locale quickly made a name for itself as a neighborhood refuge where everyone feels welcome. Whether kicking back with work colleagues or hanging out with the wife and kids, locals have embraced this eclectic neighborhood joint that proves good things do happen outside the Loop, and they are most certainly worth the trip. Charles Bishop, who opened this establishment with Raven Grill owners Sara and Rob Cromie, gives us the scoop on how the first year went down and what he's serving up next.

One year in, is Cottonwood the place that you envisioned?
It's definitely different in the sense of, it ended up being more of a restaurant than we anticipated. We also have Liberty Station, which is on Washington, kinda close to downtown. One of the major things about Liberty is we always wanted a kitchen. [It's] in a historic building [so] we couldn't really modify the building. This space lent itself [to that], and we were able to add a kitchen, still keeping in mind that we are a bar and not so much a restaurant. And I think this neighborhood was really starving for more restaurants. I think we anticipated our food sales being about 20 to 25 percent, and now it's about 35 to 40 percent. Still, we are in that bar category but with a lot more food, a lot more service, a lot more families, which feels good.

What need do you feel Cottonwood has met, that guests couldn't get before at other similar places?
Definitely a place to go in the neighborhood. Also, you get a little more of the outside. Another place where you can get music. We have bands that will come usually at least a couple times a week. So, music out in this area. Often, we have beers on that you might not be able to get [elsewhere]. Bringing something a little more out this way; bringing the good stuff outside the Loop.

What are the biggest changes you have made either structurally or on the menu?
We ended up adding more items. Adding and expanding our menu. 'Cause again, we realized that people were wanting more, you know. We always wanted better-than-bar-food [options], but people were wanting more dinner and less snacks. Definitely more staff. Our original intention was it would be almost kind of counter service, and then you would go sit down. We were finding that people were wanting more full service. So having more staff, more management. I needed a lot more help with this. Liberty's about 1,200 square feet on the inside and then there's about a 3,000-square-foot patio. And this is, like, 7,200 on the inside with another like 10,000-square-foot patio. So this is a lot larger with much more ground to cover. We added an outside bar, which is awesome. 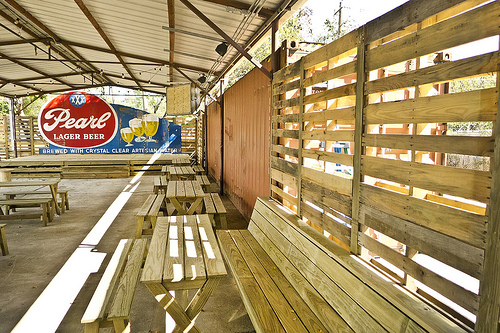 What have been the most significant challenges of your first year, if you've had any?
Summer's a little bit rough. With having a lot of our [seating] outside, that has been a challenge. I think it's gonna be the same if we have a rough winter, 'cause that will be a big thing. It's challenging to keep the staff motivated when it's slower.

I'd say another big challenge is for people really understanding our identity. When they come in you know they're thinking it's gonna be a restaurant and they're like, uh, it's a bar. And they don't want their kids out late, and it's just walking that fine line when sometimes people get rowdy at a bar and they've got kids around. So, really convincing both sides that you can still come and bring your kids. That's been a huge thing. I would say people really understanding who we are out here. You know, we had kind of already established ourselves with Liberty. And [now] people are not sure what to expect.

Did you have any really big surprises in this first year?
Our sales have been about constant, what we projected. I think our ability to expand. Our possibilities, maybe. We can host chili cook-offs and stuff. Our ability [to do that] has been kinda surprising, too.

Do you have any favorite compliments or feedback that you've received from guests?
I guess it's kind of flattering when people compare. They always say oh this feels just like Austin. It's kind of a compliment and kind of not. It's like, we're in Houston. This should feel like Houston. I've never lived in Austin. We get that all the time. We get complimented a lot on how diverse our food can be. We're always doing different stuff. We'll let the kitchen [and] our guys shine in different areas [when] they've worked in different places. Our chef was at a steakhouse before, so we'll do a really good steak night; some of our other guys came from a Mexican restaurant background, so we'll do a taco night or enchiladas and stuff like that. So people are kinda blown away.

How do you feel that your efforts from the first year have been validated?
Being voted. We got Top Ten Burger in the City. We got voted Best New Bar. We got voted one of the best patios in the city. And not that you need to have any kind press or anything like that, but it kinda reaffirms. 'Cause sometimes we get stuck here, and we don't really get to see what people are talking about outside. So when someone's like man, everyone's talking about your place, that's kinda cool. My brother was visiting some clients and, not even knowing who they were working next to, were raving about us, so that's kinda cool.

What do you hope that first-time guests feel while they are here?
A sense of being welcomed. You know, building up that regular clientele, where everyone knows their name, like Cheers, if you will. I would hope that they would feel welcome, and just like say you had a guest at your house. Same kinda thing.

What changes, if any, are planned for the upcoming year?
We're gonna change up our patio a little bit. Expanding in the area that we have. Hopefully creating more of a private event space. Got a couple ideas about that. But really, I'll tell ya, it's really like every week something is evolving. You know, we've been open for a year and it feels like maybe a month sometimes.

Anything final that you'd like to mention about your first year or anything that came to mind?
Just looking forward to many more. We definitely built this concept on longevity and being around a long while. We might at some point maybe add lunch. But really, like I said, building on the Cottonwood brand being around for a while. Not just a flash in the pan.
—Ellie Sharp