Share All sharing options for: Haig Tcholakian on Phoenicia Turning 30

When Haig Tcholakian, the son of Phoenicia Specialty Foods founders Zohrab Tcholakian and Arpi Tcholakian, decided to join the family business over six years ago, he might not have been able to predict the major changes and growth that lay ahead. What began as a small sandwich shop with a few shelves for groceries has expanded to include different locations, including a mammoth downtown store that includes bar and restaurant, MKT Bar. This week Phoenicia turned 30, and with the anniversary came a host of celebratory events at the restaurant, as well as some reflection on its humble beginnings. Here now is Haig on why the market opened a downtown location, and how the bar and restaurant came to be.

When did you decide that coming downtown was a good option?
We knew that we wanted to open a second location inside the loop. We weren't sure where, but we looked everywhere from the Heights to Montrose to near Rice University. Then we were approached by the Fingers family, and they really wanted to get a supermarket in here. They made a sweet enough deal, so we eventually just made the decision to come down here.

When did you decide to open a restaurant and bar inside the store?
It took about three years to build, from the minute we sat down with the architects, to when we first started the project. Three years to plan it and build it. I'd say somewhere in the first six months or so, when we were talking about space and seating area. I just told my family, 'Why don't we put a bar in there, a restaurant?' Not knowing exactly what is was going to turn out to be, but I knew that would be another source of income.

I'm sure that's worked out well. It's always busy.
It's been better now. It took a long time to get people to understand what it was. You know, Market Bar inside of Phoenicia Foods, and that we have a different menu. And people still associate the majority [of what we do] with the grocery store. But we've made a niche in people's minds a little more.

Who wrote the menu for the restaurant?
My sister Ann-Marie and I collaborated with chef Matt Johnson to create it. It's influenced by the spices and the ingredients and the other foods that we sell primarily. 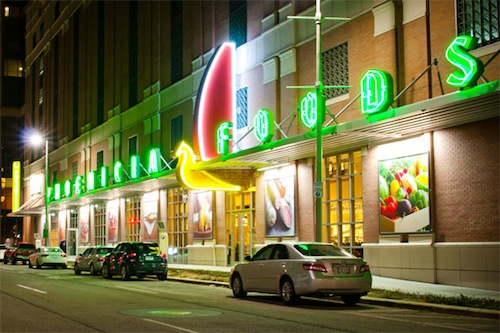 That must have been fun. I read that you have foods from fifty different countries. Was that always your intention, to be internationally focused?
It's not always the intention, but it kind of just happens. So, what happened was in 1983 my parents opened the restaurant on the Westheimer side, the old deli. It's called Phoenicia Imports and Deli. What that was is a sandwich shop with shawarma and falafel and po-boys, and things like that, where people would come for lunch. But also within that were grocery shelves of items that my mom and dad knew from back where they grew up in Lebanon. We're of Armenian descent, but they grew up in Lebanon, so that's what they knew. My dad's dad had a market in Lebanon, like a really small corner store sort of market. So he watched him and what he did. He had that kind of in his blood.

That [deli] happened in 1983. In '93 my dad finally, after customers approached him time after time after time, different ethnic groups and different business people, saying 'I can't find this anywhere,' and from that grew the demand. And then he decided to open a warehouse market next door, in the next shopping center. It started off four or 5,000 square feet and expanded to about 8,000 eventually. But then they just got too big and had to buy land across the street and build a whole place. And start with completely fresh everything, [adding] kitchens and a bakery. We grew a lot initially because while retail was a good part of the business, what we really laid the foundation from was distributorship, and distributing to wholesale accounts like restaurants, hotels, other mom-and-pop shops and grocery stores. So that's kind of how we're able to buy more and more and buy in bulk. It was good for our retail, to be able to sell at cheaper prices to our retail customers.

As far as you and your parents' very different backgrounds, how is it to work together? How receptive are they to your ideas and to the changes you wanted to make to the company?
Pretty receptive. Obviously, there is some argument; there is always some discussion, but overall we work pretty well together. My brother Raffi Tcholakian, my sister Ann-Marie and I, and my parents. Of course there are things that, at the beginning, were a little more difficult. There's the trust factor, there's the, 'I've been doing this a while,' from my parents. But working on this downtown project, and even the other store, after a couple years they were pretty comfortable with us making decisions and doing things on our own. And updating and modernizing, in terms of marketing and in terms of media and social networks and that sort of thing.

It seems like your image has evolved with you. You've brought the music scene into the bar, and it seems like you're pretty involved with all of that. And having weekly music Vinyl Nights, too.
I think we're an interesting place because we have a little bit of everything. It's not just food, it's culture. It's kind of an education to walk through the store and read the labels of where things are from, who made them, what the story behind them is. A lot of the products we carry are from countries where what we carry is Heinz to them. We don't recognize that here, as Americans, but certainly people that have traveled or are from there do.

I think that's a reason you've drawn in so many chefs to the store. Have you been surprised by how interested chefs are in your products and the clientele that you have?
It's funny because a lot of times, for us as a family, when we hear people talk about the business, and this is particularly with the chefs, at least my experience: You'll meet someone sometime and they'll tell you they've been shopping there for years, and you just didn't know. Same goes for regular customers, too. That's sort of a grassroots sort of thing, a word-of-mouth thing that we grew from. There was no marketing before. It really started about a year or two before we were planning to open downtown. So prior to that it was 25 years of people telling each other to go there. That's kind of how it grew. 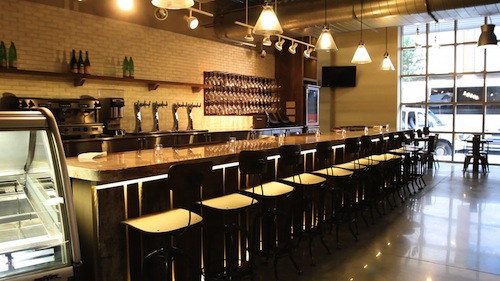 What's been the biggest obstacle for you and your parents since you've been open?
I think just growing in terms of people, and managing and putting systems into place. Managing just 20 people is a task, and we're approaching almost 300 now, so it's being able to keep an eye on them and nurture them. And [for them to] understand the identity of the business, and where we came from, and how we want to serve the customer.

Is there anything you'd do differently, or any advice you'd offer to someone who wants to follow in your footsteps?
I wouldn't say there's anything we'd do differently. I think the main thing is to be open to what customers want, and to dictate your business to that. I think a lot of people fail in terms of having a narrow mind, and just going forward no matter what. You need to, at the beginning, just go forward with what you think is going to work, but if it's not as successful as you think it should be, then open up. Try different things. You have to be very flexible.

What do you see for the future? Are you going to open other restaurants? Bars?
Nothing specifically planned. I think if we were to do things, it would probably be further out, outer Houston like The Woodlands or Sugar Land. Those kinds of places probably.

In the next five years? Ten years?
I'd say five years is realistic. I'd say we're open to all kinds of different things, but it all depends on the area and what would work. We're comfortable just opening a restaurant or a restaurant with some groceries.

Is there anything else you'd like to add that I might have missed?
Just that I think that we're a unique story. And how we grew is a combination of many things, but I think at the forefront is just the diversity of Houston and the overall U.S.; people are open to tasting new things. People didn't know what a gyro sandwich was 20 years ago, or falafel, or whatever it is. But now everybody knows because people open restaurants, cook it at home, the cooking networks, all those things lend to it. But also specifically for Houston, it's the diversity and, thankfully, the economic stability as opposed to other places.

And the energy industry in terms of people traveling to the Middle East and other parts of the world. There are a lot of people who live here from different parts of the world, and while they're not all of our business, they've propped us up for a long time, and we owe it to them.