Next year, Austin will receive a pizza parlor courtesy of the Uchi management team, including prominent pastry chef Philip Speer. The pizza parlor will double as a pastry shop and will be called St. Philip, after the patron saint of bakers. As far as how this will affect his role at Uchi and his identity as an Austin or Houston chef, Speer tells Eater: "I love Houston. My role will never lessen here; I'll just sleep less and travel more." He jokes, "Houston isn't done with me yet, as much as they might like to be."

Speer is the culinary director of the Uchi management team, which includes co-founder Daryl Kunik and Uchi's chef and owner Tyson Cole, who are also partners and collaborators in the upcoming shop. Some might be wondering what kind of pizza offerings to expect at St. Philip, since Uchi is known as a high-end Japanese eatery in Montrose. Speer says that this forthcoming establishment will be anything but fancy, "It will be a neighborhood spot, more casual." 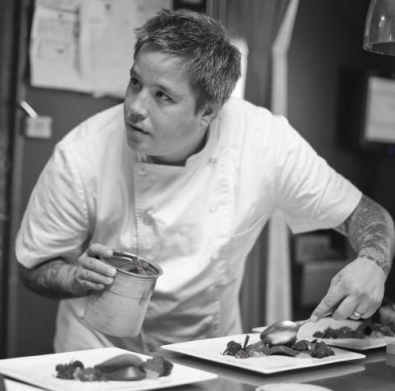 The preparation and menu editing at Uchi has been well documented, so even with "let-your-hair-down fun pizza," it's likely that the ingredients and flavor combinations will be carefully selected. The group has been developing the crust and what they hope will be the "perfect sauce" for months now. They hope to have St. Philip up and running in Austin (4715 South Lamar) by the summer of 2014. The group will implement a wine program and an extensive craft beer selection there, too. They are culling brew options from all of the chef group's favorite beers. Speer explains, "we have a lot of beer nerds in our restaurant group."

Expect sandwiches, shareable plates, pastries, craft beer, wine, breads and of course, pizza at St. Philip. With so much going on, I asked Speer if he really thought he'd still be a part of the Houston chef scene. "If Houston will allow me," Speer answers. "I love the chef community in Houston and plan to be a big part of its dining scene forever."
· All Coming Attractions [-EHOU-]
· Eater Opening Reports [-EHOU-]