Share All sharing options for: Hugo Ortega Will Open Caracol on December 7

"When I was seven years old I went to Veracruz with my mom," chef and restaurateur Hugo Ortega tells Eater. "As soon as I got to the beach and saw the ocean for the first time in my life, there was a gentleman in front of us calling 'Ceviche! Ceviche!' He was carrying his huachinango [red snapper] on his back, and he snatched one fish, started filleting it in front of us, squeezed some lime on it, and that's what ceviche was," Ortega says. "And I [liked] what this gentleman had to offer." Years later, when he tried his hand at fishing, Ortega learned that fishermen have among the most challenging jobs in the food industry, and he developed a deep sense of respect for both the sea creatures and the men and women who dedicate their lives to responsible fishing. "You'll see when you're fishing, the ocean is so beautiful, but sometimes you can't catch anything," Ortega remembers. "It made me respect so much what fishermen do.

Today I set up these wonderful people who work so hard to bring this beautiful fish to the table, and for me to use my hand to butterfly and fillet that fish, it makes me respect that someone caught it six hours ago."

When Ortega visited his brother Jose Luis Ortega, an executive chef in Belize, he enjoyed a conch ceviche and fell in love with both the sea snail and Spanish word for that sea creature, caracol. So when he and his wife (and co-owner of Backstreet Cafe) Tracy Vaught bought a house in Galveston, they named it Caracol. "It's a small house, but many houses in Galveston have names," Ortega says.

Ortega is someone who has maintained a vivid recollection of his humble beginnings in this industry, whose sense of authenticity endures, something that's sometimes lost when a chef reaches his level of prominence. The James Beard Award-nominated chef won't mention his acclaim or the respect and admiration he's earned in town. Instead, he will tell you that he still sees himself as the cook who grew from washing dishes at Backstreet, a restaurant he now owns with Vaught. He'll tell you that he idolized Robert Del Grande and once dreamt of, but never imagined he'd own a restaurant on "that beautiful boulevard" Post Oak.

At Hugo's, Ortega made authentic Mexican fare like panucho con cochinita and chiles en nogada mainstream in a city known for its proliferation of Tex-Mex dishes. Ortega is now excited to bring a taste of classic coastal Mexican offerings to the Galleria area's BBVA Compass Plaza. This new mixed-use complex also houses upscale Italian restaurant Osteria Mazzantini, although this menu will satisfy a completely different craving. Vaught and Ortega's Caracol will open on December 7, and will debut its menu of fresh seafood dishes, including campechana, fish tostadas, spicy shellfish dishes and, of course, the namesake dish: sea snails. The Houston Chronicle's Greg Morago writes that some "non-seafood dishes include turtle soup, salads, duck in red pumpkin seed sauce, and strip steak with huitlacoche mole." Las Vegas' Daniel Bridges is a consulting chef on the project, Ortega's brother Ruben Ortega will be the pastry chef and Sean Beck will run the beverage program. 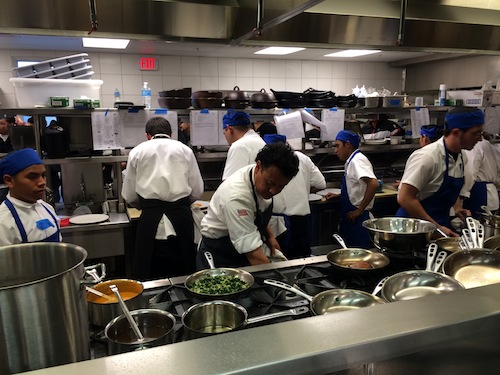 "Who'd have thought that this stupid kid on the beach would have the opportunity to be in the restaurant industry and learn about food and earn my rights to cook food and, eleven years ago, to open Hugo's," Ortega says. This Saturday he hopes to introduce Houstonians to the simple but flavorful food that he fell in love with as a young boy enjoying his first trip to the beach. Caracol opens to the public this Saturday. Call In a few days, call 713-622-9996 to make a reservation.
· Caracol [Facebook]
· All Other Opening Reports [-EHOU-]