Share All sharing options for: Brian O'Neill's Will Temporarily Close to Relaunch Next Year; New Name, Menu and Interior

We recently learned that 12-year-old Rice Village pub Brian O'Neill's will be temporarily closing to revamp its image and return with a completely different concept. After creating this event, their New Year's Eve party with the notes "Farewell Brian O'Neill's" and "Thank you for twelve amazing years," we spoke with general manager Leo Vela who tells us that owners Brian Young and Colm O'Neill will stick around, but almost everything else will go. The bar's name will change, and the interior will see a complete design renovation.

"You won't recognize it," Vela tells Eater. "It won't be as dark, and it will keep its Irish feel, that's not going way. There will be a better selection of beer and high-end wine, but everything else will be unrecognizable."

There is no set timeline at the moment, but the bar will close "after the holidays" and will relaunch sometime next year. Vela is hoping to unveil the new space earlier in the year. He said that the owners wanted to renovate the space, name and menu now because "the Rice Village has a lot more businesses coming in, we thought we needed a facelift, and then we said why not change it all up?" 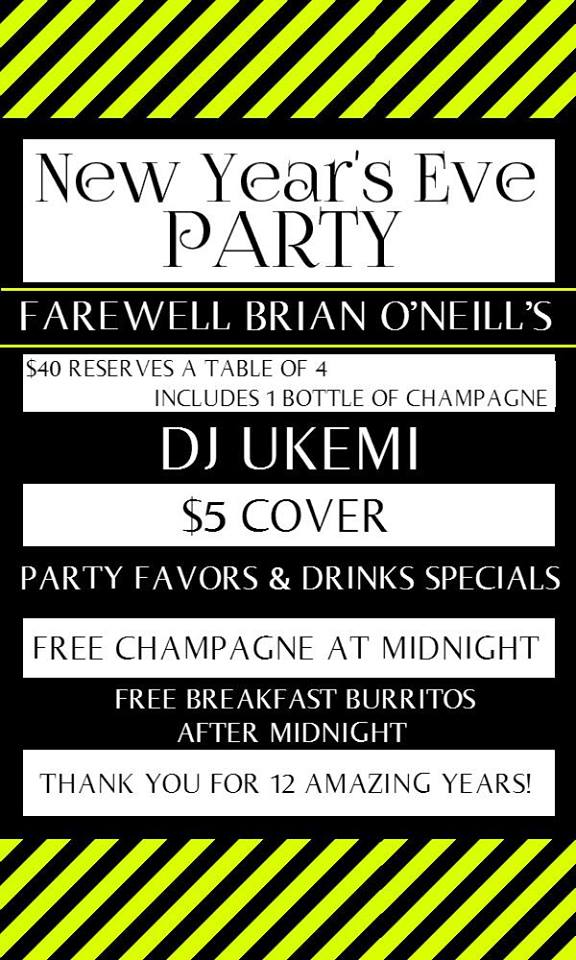 O'Neill and Young have already hired a "big-name" chef, although Vela was reluctant to announce who that might be or where he or she has worked. A quick glance at the menu, Vela shared, revealed a leg of lamb and tuna tartare. It's a big departure from the fried food and burgers that some Brian O'Neill's regulars have become accustomed to. Apart from casual pub fare, the game room will also be gone, as well as the raised stage. Although some of the other familiar features will remain, including live music acts and the ever-popular BON Running Club, where several runners join for a weekly jog and buffet happy hour, which Vela says will be "incorporated" into the new place. Vela tells us that while they're not sure about the reopening date, he can say with certainty that this will be their last New Year's Eve party as Brian O'Neill's.
· Brian O'Neill's [Official Site]
· Event Page [Facebook]