Upcoming Bar Lei Low is One Step Closer to Opening

Share All sharing options for: Upcoming Bar Lei Low is One Step Closer to Opening

Tikiphiles take heart. Lei Low, the much-anticipated new cocktail bar by Down House's Elizabeth and Russell Thoede —who teamed up with bar owners Brad Moore and Ryan Rouse for this project—is edging closer to opening in what its owners refer to an an "up and coming" area of the Heights. "We just got our plumbing inspected and approved on Thursday," says Elizabeth. "And we're laying concrete on Friday. We're still hoping for an opening before the end of the year, even though we haven't set an opening date yet."

But when Lei Low takes its place on Houston's craft cocktail scene, expect a little nostalgia with a distinct Bayou City twist. Russell has been a Tiki lover since the day he found an old cocktail tome by "Trader" Vic Bergeron in a used bookstore. Trader Vic, along with Donn Beach (of Don the Beachcomber fame), created American Tiki culture in the late 1930s and throughout the 1940s, bringing rum-laced and South Pacific Island-inspired drinks to an eager American public. All over the country, in the decades just prior to the end of World War II through the Baby Boom of the 1950s, Tiki bars and Tiki-themed restaurants popped up, proudly displaying thatched roofs, Polynesian A-frames and a drink list laced with what we now know as classics, including the Mai Tai and the Zombie (Tiki legend holds that the drink was considered so potent Don the Beachcomber bartenders were advised that patrons shouldn't drink more than two). Carved Tiki gods stood sentinel at entrances, the flotsam and jetsam of island life littered the walls. In the case of Trader Vic's Tiki time came with high-end Asian cuisine. 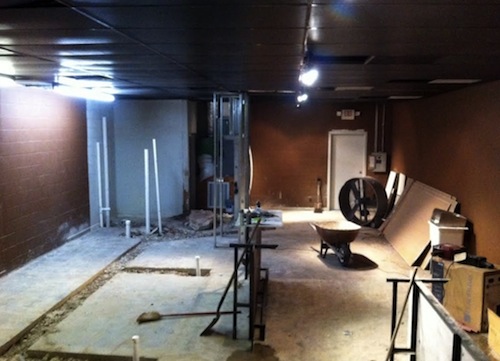 Tiki culture waned from the 1960s through the 1980s, but is enjoying a bit of a revival now in certain spots around the country. Russell admits to loving all that, but he's determined to put his own spin on the tradition,"There's a specific palate in Houston when it comes to cocktails, and we wanted to adapt our offerings to a Southeast Texas taste," he says. "We'll use local fruits and flavors to create our drinks, and put less emphasis on those big, syrupy creations. We want to be a cocktail bar first, but we're definitely a Tiki bar."

Elizabeth agrees, noting that the décor will be bamboo, "a ton of bamboo; we're covering the walls with it," and says that Lei Low's back bar will be an A-frame style that harkens to traditional Polynesian architecture. Also look for a collection of home-grown Tiki artifacts, "less weapons and spears and fish nets, and more art, things that people might have just collected in their homes from the 1950s and '60s," says Russell. The pair are clearly excited to share their version of this slice of cocktail history with Houston. "The history of Tiki bars and Tiki culture is really inspiring to me," says Russell. "When you think of these two guys who created this movement and these drinks that evoke such a time and place. We've seen many of the new Tiki bars that have opened in recent years, in California and New York. They're intimate and they're doing great work with drinks. We're ready to bring that to Houston."