Share All sharing options for: Lamburghinis and More with Eatsie Boy Matt Marcus

As part of Burger Week, the Eatsie Boys agreed to bring back their signature lamb burger, dubbed the Lamburghini, that hasn't been seen the brick and mortar cafe opened in December. The seasoned lamb patty is topped with a fried egg, feta cheese, spring mix, cucumber, soy vinaigrette and served on a challah bun. Chef Matt Marcus that the original concept for the burger came from two sources. First, he "wanted to serve a burger in a burger city, but being the Eatsie Boys we wanted to do it our way." The choice of lamb also acknowledged partner Alex Vassilakidis's Greek heritage and the truck's location at the Agora coffeeshop. 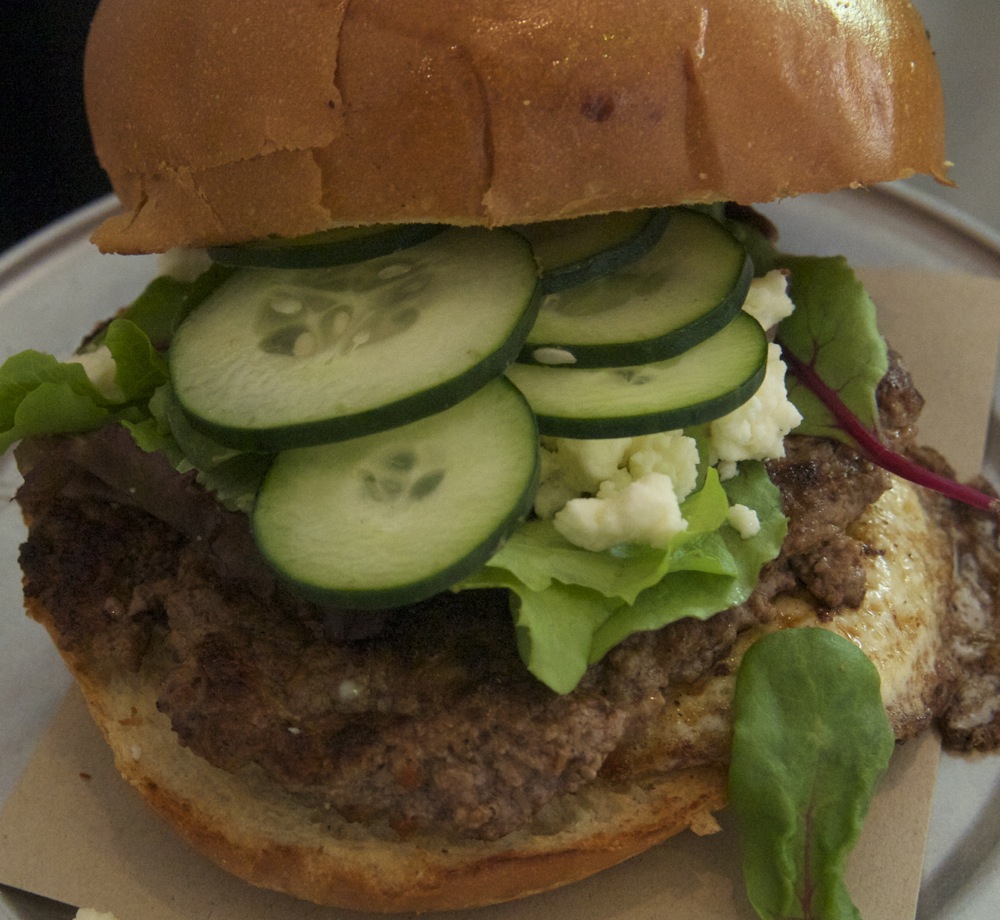 What do you like best about it? I like the egg. It's cooked to a perfect over easy. When you bite into it, the yolk gushes all over your face ? The sharpness of the feta and the fattiness of the lamb really contrast with each other.

You've introduced fries at the Cafe. Tell me about them. I love French fries a lot. We use one-pound Idaho potatoes with high temp blanching. We do a blanch, then we do a fry. The blanch breaks down the starch of the potato. We let them cool completely. Then we fry to order. That's what gives them the mashed potato inside and crisp outside. We finish them with sea salt and parsley.

Did any experiences shape your burger philosophy? When I was at the Fat Duck in London, we did the perfection series. We made the perfect hamburger. That was pretty interesting. We came up with a blend of brisket, short rib and sirloin. We found that to be the most tasty meat: not too fatty, not too lean. We found that the way you structure your hamburger, the building of it, was important. When you bite into a burger, a lot of people put the cheese on the bottom, which is how they did it, then the burger, then the condiments on top.

If you put the cheese on top, the cheese hits your palate first, and dairy covers your palate. We found that when you grind the burger, you don't want to mess with the grind too much. You pretty much want to form it as soon as possible, because it messes with the grain of the burger.

What's the best burger you've ever had? Minetta Tavern is the best burger in the country, no doubt. They take steak, grind it up, sear it, serve it rare as shit. It's pretty much having a steak that's been chewed already, put in a patty, served on a bun.