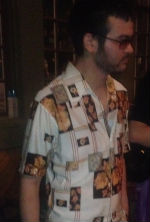 Former Anvil manager Chris Frankel is now the bar manager at RDG + Bar Annie. Eater Houston's Bartender of the Year in 2011, Frankel's wine-based cocktails at Underbelly earned praised from Chronicle critic Alison Cook. Frankel says his goal is to create "a destination bar program" at RDG: a spot that had previously been known for "The Show." [EaterWire/29-95]