Share All sharing options for: Bombay Pizza Co. Lawsuit Comes to a Close

In a case that has been ongoing since December of 2011, Bombay Pizza Co. has finally settled a lawsuit between former employees who accuse the owners of withholding the proper overtime wages they were due. Instead of paying employees time-and-a-half when they worked over 40 hours per week, the owners only paid regular wages, thereby violating the Fair Labor Standards Act (FLSA). Kyle Nielsen was the first to break the news that the case had been settled.

"In short, [the] plaintiff alleges that Bombay Pizza paid all cooks (at least 7 others) just straight hours for overtime for a couple years (November 2009 - November 2011, the whole time he worked there) and that they all worked overtime hours regularly," Nielsen tells Eater. "His pay stubs show that he worked at least 100 hours most pay periods, and as much as 150 hours once."

Some are boycotting the pizzeria and want to actively communicate their disapproval of the restaurant owners' actions. Nielsen has contacted a few groups that fight wage theft so they can stage a protest; he says he'll be out there soon regardless.

Here is an image of the court documents listing the settlement agreement: 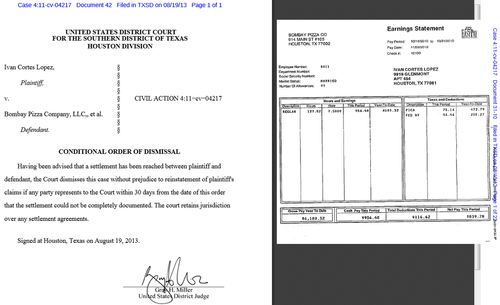 This isn't the first time Houston has seen employees claiming that restaurant owners cheated them out of their fair wages. Earlier this year Corner Table's Bruce Molzan was accused of withholding pay from past employees.
· All Lawsuits on Eater Houston [-EHOU-]
· Bombay Pizza Co. [Official Site]