Share All sharing options for: Queen Vic/Oporto Duo to Open Midtown Spot in 2014

Although they're known for packing flavorful punches in small spaces, chefs Richard Di Virgilio and his wife Shiva Patel are preparing to open their third Houston establishment—and this one's big.

Patel and Di Virgilio currently own the Brit-inspired, Indian-fusion gastropub Queen Vic and popular Portuguese-influenced wine bar Oporto. Di Virgilio tells Eater that this third venture will be a "second generation Oporto" set in Midtown. It will feature a menu that's similar to but more comprehensive than Oporto's, since a full kitchen will be installed at 125 West Gray. Patel and her husband Di Virgilio, who is of Portuguese-Italian descent, will pair up to create the food menu at this location. They're hiring an out-of-state bar consultant but were hesitant to disclose that person's name, since they haven't signed a contract just yet. 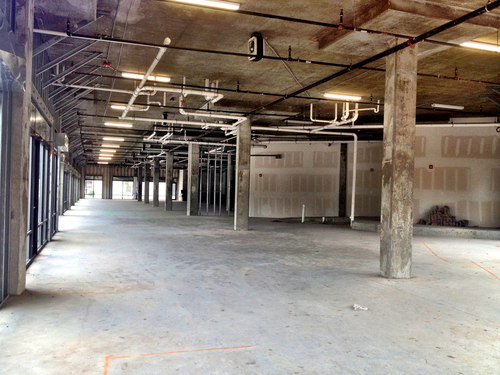 [The interior of the new space, Photo by Darla Guillen/EHOU]

Di Virgilio did tell Eater that design guru Michael Hsu, the architect behind Uchi and Artisans, is going to conceive the interior for this massive 3500-square-foot space at the divergence of West Gray and Webster. While they're only at the beginning of the design phase, the pair hopes to have it up and running in March of next year.
—Darla Guillen
· All Coverage of Expansions [~EHOU~]