Morton's Grille Opens to the Public

Share All sharing options for: Morton's Grille Opens to the Public

Last night was the preview event for Morton's Grille in The Woodlands Waterway Square. The restaurant, which is officially open to the public today (September 10), is a casual offshoot of high-end steakhouse Morton's. When Tilman Fertitta added Morton's to the Landry's portfolio, he said he would reinvigorate and modernize that chain, so it comes as no surprise that they are debuting a grille in that wealthy Houston-area suburb dense with young professionals as well as retirees who recognize the Morton's name. The restaurant hopes to attract a younger clientele while maintaining the older crowd that the steakhouse already hosts.

This space, which seats about 160, felt relatively smaller when compared to similar establishments. Although efficient use is made out of the L-shaped layout. It's also versatile, with the bar to the right of the entrance, the dining room just to the left of the entrance and an elevated platform just beyond that, where a small area can be partitioned off for private parties. And while it's easy to be skeptical of the food produced by massive chains—there are over 70 Morton's Steakhouse locations— the food at yesterday's preview (not a regular service but a series of samples), was surprisingly good. Although at times the casual bites, like the pastrami Reuben sandwiches, short rib sliders and flatbreads seemed incongruous with the chandeliers, fancy booths and generally elegant atmosphere. But it all came together and really did seem like a comfortable after-work destination. Also, the regular menu will feature steak, tuna poke and other typical steakhouse fare. 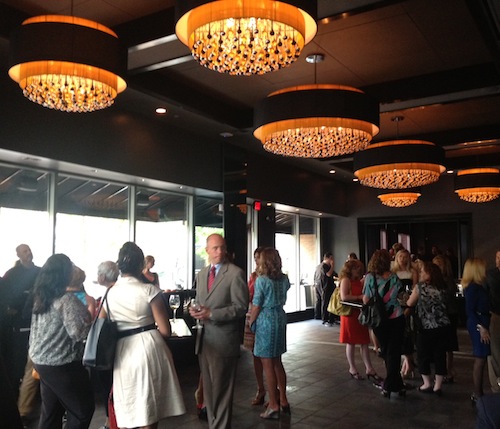 The cocktail names and variety are playful and encourage making dinnertime more social. The Punch in the Face cocktail, with its bacon stick mixer, and the Woodlands Passion, a pineapple-infused vodka drink that was deceptively strong, were colorful and fun, they didn't look like your average, stuffy steakhouse bar martini. The rest of the beverage program includes large, meant-to-be-shared libations that run the gamut from classic to the trendy to the bachelorette carafe, bargain-priced for a group of friends.

A versatile space that seems to deliver what the owners hope to achieve, along with food that was not necessarily innovative but still pretty outstanding, Morton's Grille hardly seems like a mere ancillary project. But that was a preview, and the real test will be whether the restaurant group accomplishes its goal of drawing in a diverse daily crowd for no reason other than that it's Tuesday night.
· Morton's Grille [Facebook]
· All Other Opening Reports [-EHOU-]