It's best known for offering locals a taste of authentic Mexican food, but Cuchara has also gained recognition for its strong cocktail program, creative food presentation and for the contemporary art that fills the space. The home-style dishes are never pretentious but are also decidedly not Tex-Mex; they reflect the heart and culture at the center of this Montrose spot. In this interview, co-owner Ana Beaven looks back at the restaurant's first year in business and shares her thoughts on the future of this beloved eatery.

How did you decide on the concept for Cuchara?
I really wanted to show Houston what a Mexican restaurant is, like a true authentic Mexican restaurant without piñatas, without cheesiness, just a contemporary, fun place that you could find in Mexico City, in any hip neighborhood. And my sister [Cecilia Beaven] who is a very good artist, helped me put together the concept about decorating it in an artistic way, certain colors, murals, 'cause murals are big in Mexico. But give them a little twist, and make them a little more modern and colorful, rather than the traditional mural style from Mexico. And that's how we started thinking. Then I found the right corner, I found the right architect and right menu and that's it.

You have become sort of an art destination in Houston because of that mural— it sets you apart from places like Hugo's, which also aims at authentic Mexican food.
Yes.

Was that your intention?
I'm a big fan of Hugo's, and I think Hugo's opened the door for a restaurant like mine to be able to exist because [Hugo Ortega] was the first one to start using real ingredients, and he was the first one to show that you don't get chips and salsa the moment you sit down, because in Mexico you don't.

Right.
So he was really adventurous and helped open the door for me. The difference probably, is that Hugo is from Puebla, and I think that the way they cook reflects a little bit more that side of Mexico, whereas mine is more homemade Mexico City, traditional grandmother's food.

Do you intend to stick to that one region or do you ever switch it up with other regions' cuisines?
Yes because Mexico City is actually a city where we get the best of the best. We get the best fish, the best meats, the best cold cuts, the best of everything, being so centralized. You know, in the Third World it's like that, there's the one city that has everything, and that's Mexico City. So we have the best of the best from Yucatan, from Veracruz, from Oaxaca, from Puebla, and that's the way I grew up: eating in really good restaurants since my mom was not such a cook. But my grandma is, and all the recipes here are hers. But I grew up in restaurants, and I grew up loving restaurants from different parts of Mexico, put in Mexico City. 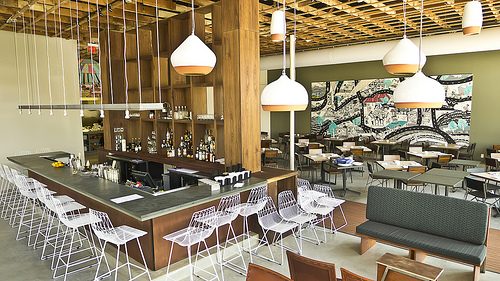 And speaking to that, to your grandmother's recipes, I've noticed that a lot of the people in your kitchen are women.
Everyone. Yes. I think we're the only one in Houston, no I don't think [it], it is true, we're the only kitchen in Houston with only women. Even the dishwashers are women, and it is intentional because in my mind, when I go back to Mexico, I don't crave my father's rice pudding or my grandfather's meatloaf, I crave my grandma's, my aunt's [food], and growing up with that kind of food, especially from my grandma's kitchen, I just wanted to show the world that you don't have to be a chef. You can be a great cook, and women are great cooks by nature, they nourish, they cook for their kids for their grandkids, for the whole family. Even if they have another job, it's like part of their love to the family to cook. So they don't have to be a professional chef, they just have to love to cook. And all of these ladies are crazy-good cooks.

Do they help decide on the menu and menu changes, or is that something you and [co-owner Charlie McDaniel] do?
Well the first menu, I put together, and I had the help of a really good friend of mine who used to own a little restaurant in Veracruz. She lives in Houston, and she helped me give it a little twist to make it unique. The whole recipes were my grandmother's, but we gave it a little something extra just to make it more appealing. And then the lunch menu changes every single day. We serve comida corrida, which is like food on the run. So those menus, the girls in the kitchen put together, most times by themselves. But if I have an idea, a dream or my grandma calls me, 'Hey, do a banana stuffed with plantain purée,' I tell them and we develop the recipes for the new food. We've been serving lunch for seven months, and we have repeated maybe two or three menus.

So it's constantly changing.
We have a big basket with the menus that I print everyday. So we keep it in case we repeat them, but we have so many ideas and recipes that we really don't want to repeat unless it's absolutely necessary. So they're in charge of that, and the brunch menu I put together along with them, and every Sunday we have a special that they pick based on what they see at the market. They love going to the market, I go with them and if we see flor de calabaza we come up with a something with flor de calabaza. I wanted to have a menu that was different from anyone's in town.

How long has Houston been your town?
I keep track with my dog's age. Okay, my dog died two years ago, so I've been here 17 years.

Is there a reason you chose this location?
Yes. Well I live a few blocks from here, and I wanted a place where I could walk, basically, and for the new kind of food that we serve, we need adventurous clientele. And people in this neighborhood are known for liking new things, and people who live in the suburbs come to this area to try something new. So I knew I wanted this area. And when I saw this place I knew, okay it's here or I don't know where.

Looking back at your first year in business, is there anything that you would do differently?
No, I think everything has been really good. Maybe I will never do a party that lasts from 11 a.m. to 10 p.m. [like the anniversary party], other than that everything else is fine. Because I'm tired?no, I'm playing.

What do you see for the future of Cuchara? Any second locations ?
I think if we ever do something outside of Cuchara, it'll be kind of sponsored by Cuchara, but it won't be the same. I think this is unique. The food goes with the building, the building goes with the neighborhood, the art goes with the concept. I don't want to reproduce it anywhere because it wouldn't be the same. Maybe I'll decide to do something different, maybe a taquería or something, I don't know, but never another Cuchara per say. And we've been approached by certain investors who say we should open in The Woodlands, should open in Sugar Land, but it wouldn't be the same. We're not a chain, we're just Cuchara. My 24-hours-a-day are given to Cuchara. 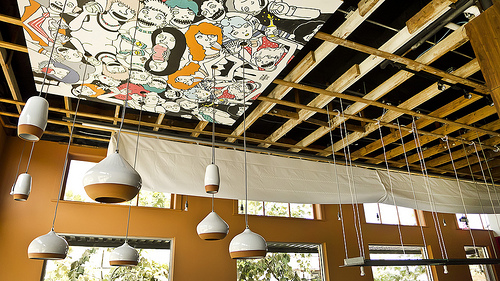