Bernie's Burger Bus to Open Three Brick-and-Mortar Spots in the Next Five Years: An Interview with the Owner

Share All sharing options for: Bernie's Burger Bus to Open Three Brick-and-Mortar Spots in the Next Five Years: An Interview with the Owner

We're just a month away from Bernie's Burger Bus' third anniversary, and owner Justin Turner has big plans for his mobile eatery empire. With three trucks currently in rotation, and about 28 shifts per week, Turner says he's blown away by how well they've done. Having amassed an impressive number of local and national awards, and after reaching grocery-store-retail success with his products like the chipotle aioli and ketchup bottles—currently in 27 Kroger stores—Turner says there are still big plans for the future. And we're not just talking the packaging of the BBB pickles, which will be in stores sometime in October.

In an interview today, Turner told Eater that he will soon be opening three restaurants. He was particularly animated when discussing his cooks, saying he prefers enthusiasm and ambition over experience and pedigree. "I want to train cooks who are passionate about food," Turner said. "As we grow, they grow with me. None of this, 'We've grown and I don't need you anymore' because if we're going to the top, we're all doing it together." And boy are they growing, Turner will be opening three brick-and-mortar stores in the next five years. The first one will be open next spring or early next year.

Eater Houston: So we've been hearing a lot about your plans to open a shop soon, can you tell us where and when you think it'll be open?

Justin Turner: We have not signed the lease, so I'm reluctant to say where exactly it's going to be, but it'll be somewhere on Bellaire west of 610.

EH: How did you decide on this location?

JT: That neighborhood is underserved. There are great places there, but I feel like I could be ahead of the curve when it comes to bringing Bellaire into the 21st century. Not many restaurateurs are taking their business there. I want to hopefully rejuvenate it, so others can follow and we can create another cool place instead of Montrose and Heights, where every restaurateur wants to be. We love the family atmosphere that Bellaire provides, the schools and community.

EH: What's changing? Anything going to be different in the shop?

JT: Not much, we'll expand the menu and do a few more burgers, throw in some different types of proteins. So I might have some wild game burgers, a chicken burger as far as the patties, but the burger and theme will stay the same. If it calls for chicken or pheasant, I'll make a burger with that, but it won't be a permanent thing and we'll always do specials because that's what keeps me interested.

EH: Are you going to incorporate the lobster rolls that you've been serving at Inversion on some Fridays?

JT: Oh yeah, we'll do those. We want to keep it special. What scares me the most is having lobster left over. I want to build an audience to go in, grab it and then I'm out [of lobster]. That way it's always fresh. We don't make any money on it, it's literally a wash. And I'm not going to buy the mayonnaise for it, I'm going to make it. The whole prep for lobster Fridays has been intense. A lot of man hours. I just want to keep it special, and my staff likes it . They love watching me prep; seafood is my expertise. It's why I got the personal chef job for Shane Battier, that's how I got to Houston.

EH: Any other changes in the restaurant?

JT: There will be a table in the kitchen seating 12 to 18 people where we'll be doing pop-up chef table dinners. Those won't be burger related at all. New burgers with new toppings and new names and cool stuff to continue.

EH: What will you be adding to the menu?

JT: We're really excited about the spiked milkshakes. We'll have chocolate-covered pretzel with Frangelico, and an apple pie crumble one with pie and Calvados in the shake. We'll probably have cinnamon and vanilla ice cream.

EH: That sounds good! Who's going to be providing the ice cream?

JT: More than likely, I'm going to make it. My first culinary job was at a really high-end French restaurant in Memphis. I worked there as their pastry chef and made a ton of different ice creams and desserts, not my choice of where to be but I learned a lot. I make an outstanding crème brûlée. As far as desserts, I have a good idea for take-home or eat-there option that I want people to see. And I'm having some custom things made [in the restaurant]. Jim Herd [Collaborative Projects] who designed Underbelly, Haven and Pastry War, he's one of the best in town. As far as build-out he was my best option. The drawings are already done. It's going to be unique. I really wanted my concept to translate and I didn't want to lose that.

EH: Sounds like you're hinting at incorporating the bus. Is that going to be a part of the interior design?

JT: Ohhh yeah. Let's just say, you're still going to be getting food out of a bus.

EH: How big is the space? About how many people will you be able to seat?

JT: Inside and out, just over 120 people. Depends on [the lease revisions], it's been going on since March, and I want to make sure all the little details are right because it's my first time doing this. We're already looking at another place out in the 'burbs. We're looking at Katy for next one because we do so well there. I could literally show up at a cemetery and Tweet or Facebook that we're there and about 200 people would show up. We used to park a bus at Oh La La out there and about 300 to 400 people would show up in a 4-hour period. 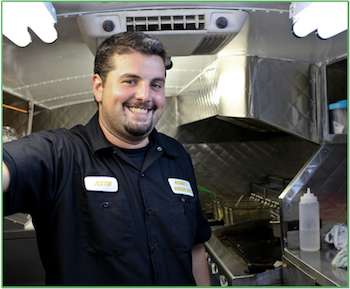 EH: When do you think the Katy location will be open?

JT: Probably fall of 2014 is a reasonable goal. We're looking, and now that we have the design down, every location we do will be exactly the same. Bellaire will be our hub, where we do the production and prep for all the restaurants. Katy will probably be bigger just in seating because we won't need a full kitchen just a service one, a walk-in.

EH: Why did you decide to stick with one full kitchen at Bellaire and go with just service kitchens at the other locations?

JT: Quality control. I have to be a part of the process. The easiest thing is to teach someone how to cook a burger, but it's really hard for me to teach someone how to prep. Our recipes are tried and true and I believe in them, but if I get a tomato that's not too ripe and is more acidic, I have to adjust the recipe. I can teach that, but it's a lot harder to do at multiple locations.

JT: We'll never dive off the menu. I literally want to concentrate on doing the best fries and burgers. The only way to do that is to have a commissary kitchen so I can see the beef that's going to Katy or Woodlands or wherever we decide to go. We're able to move through inventory faster that way. I'll probably have food deliveries five days a week. That's the whole reason I've had very little bad feedback, it's because we're doing all our prep in one kitchen.

EH: So you'll still have the trucks out, serving?

JT: Yes. But our goal is to have 3 Bernie's Burger Bus stops in the next 5 years. The buses will still be going full time. We run 28 shifts per week with the three trucks. That won't change.

EH: What's been the most surprising part of your expansion so far?

JT: Just where we've come. Honestly, getting into Reliant Stadium and having a permanent stand in section 114 and 115 is still mind-blowing. I've been to Texans games a lot and would walk by Prince's, and would think, 'Man how cool would it be to have a stand here?'
· Bernie's Burger Bus [Official Site]
· All Other Bernie's Coverage [-EHOU-]