While some bars on Washington Avenue have been trying to reinvent the way we see that nightlife-friendly scene by providing laid-back atmospheres and craft cocktails and beer (Underdogs and Liberty Station to mention a few), there are others who keep resisting the change. One of those people is the man behind Roosevelt, Fifth Amendment, and—with his extended group of partners—the Drinkery locations: Saleem Fernandez. He has taken over the space that once housed Sawyer Park (which was owned by his cousins who have a business partnership from which Fernandez withdrew in 2008). The new bar is called Social Junkie, and it's opening today (September 9) at 4 p.m. It will be a new sports bar-slash-lounge with a 7,200-square-foot space that is divided into dance area, bar, restaurant and private rooms for parties and game watching.

"We're not a club, we're a contemporary and upscale sports bar, not to be confused with Champps or Twin Peaks or Hooters, I think people consider those sports bars by default just because they have TVs," Fernandez says. "We have palm trees and projections screens, it'll look like Miami when you drive up."

He says their bar is also different from bars J. Black's and Dogwood since Social Junkie will revolve around sports. Fernandez tells Eater that he has managed to secure a contract agreement with Andre Johnson, who will head there on Monday nights with teammates in tow. According to Fernandez, DeAndre Hopkins will be there every Tuesday night airing live on 790 AM, so they'll have a radio show broadcast from the bar every week. He says he hopes to stray far from the stale sports bar atmosphere he's seen at other spots. "Pub fiction. It's just, you know, I love those guys to death but it's just 2005, "Fernandez says. "It's been a while since something fresh has come up as far as sports bars go." 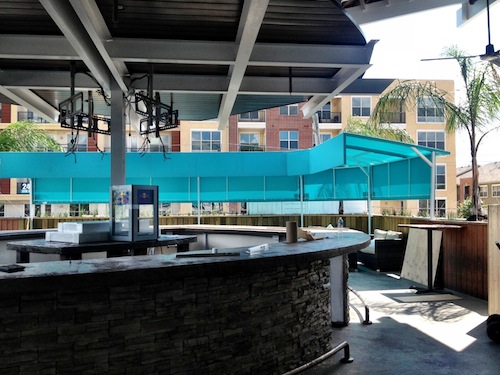 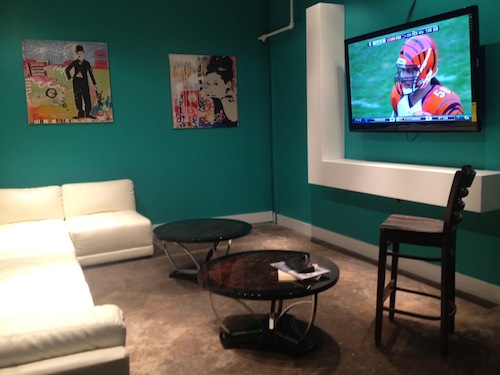 As far as the food, Fernandez says they have crafted a great burger that's "50-percent beef, 30-percent brisket and 20-percent chuck." He continues, "Our hamburgers are absolutely outstanding and our goal is to compete or be with people like Christian's Tailgate because our [burgers] are way better than theirs," Fernandez says. "Ultimately, that's our goal is to be in that conversation on the burgers. "

They'll also serve fried chicken, bacon mac and cheese, pork sliders and will host a steak night every Tuesday night. The drinks are priced between $6 to $8 on average, and the food prices are about $6 to $12 for most items. On the first floor are private rooms available for reservation at $125 per hour, with a minimum of 3 hours, and that goes towards food and beverage. Fernandez says, "It works out to be the same thing as out there but now you have a private setting, you [and your friends] have 3 hours to spend $375."

Whether you have a healthy indifference to Miami-inspired décor and Bud Light with your burger, or if that's precisely what you seek, this new Washington Avenue bar is opening to the public today (September 9) at 4 p.m. Although you might want to take a list of the places listed above to see how they compare.
· Social Junkie [Facebook]
· All Other Opening Reports [-EHOU-]