While Goro & Gun's original ramen focus took a sudden turn toward other Japanese dishes, its cocktail program hasn't looked back once since the place opened. The consistently good drinks and new direction from chef JD Woodward and owner Joshua Martinez have made this izakaya spot a downtown destination. (Drinking with a taxidermy lion doesn't hurt, either.) For the last several months, bar manager Alex Gregg has been giving locals a whole new reason to head there for dinner and drinks: G&G Syrup Division. In a sort of mad scientist approach to cocktail crafting, Gregg has been working on different flavors of aromatic syrups which are available for sample with the drinks there now, and also recently became available in bottles that can be purchased at the bar. These cocktail mixers are set to make exhaustive muddling and mixing for home bartenders almost obsolete, since the flavors are intense and distinct.

"Currently, we have two flavors bottled: Lemongrass and Aromatic, both of which are in used in cocktails on our menu," Gregg told Eater. "At the moment we have 750-ml bottles (the standard size for wine bottles) and they are $12 each. In the next couple of weeks, I will have a smaller size available (375-ml or half a bottle of wine) and these will probably go for $8." The bar manager says that the smaller size is better suited for the home bartender or cook. For the moment, these syrups are only available for purchase at Goro & Gun, but Gregg is hoping to get them on the shelves of other retailers soon. "I bottle them in a way that creates a vacuum seal, so they are shelf stable until opened after which they need to be refrigerated, but will last for well over a month," Gregg explains. "I use them in cocktails, but both of these flavors are very versatile in cooking/ baking. I know of people that have used them in baked goods, ice cream, tea, salad dressing and grilled meats. In the future I plan to expand the line." Once the line is more established, he plans to create custom flavors for clients, too. In the meantime, see how they use them in some drinks at the bar. 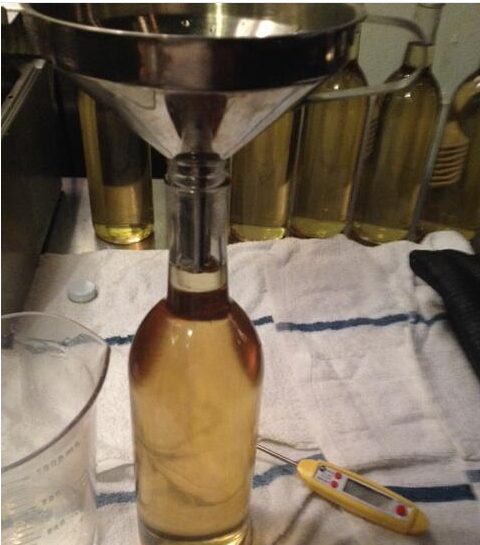 The cocktails that currently feature the syrups are the "Here We Are Now (Entertain Us)" and the "Aromatic Toddy" which can be purchased now at at Goro & Gun. Here are the recipes for home bartenders:

Shake, strain into a collins glass with cubes and top with soda. Garnish with a lemon wheel.