Leading up to the second anniversary of Houston's Uchi, we're taking a few behind the scenes looks at the restaurant, including a special feature next week. Here now, we chat with chef de cuisine Kaz Edwards on the second year in Houston.

We're fast approaching the second anniversary of Montrose's highly touted Japanese eatery Uchi. When it opened, Uchi quickly became a Houston sensation, one of those impossible-to-get-table spots that garner headlines and diners eager to brave the weeks-long wait to see what all the fuss is about. Over the last two years, the Austin transplant has found its very own Houston soul, even while still being lauded for imaginative cuisine and a must-visit destination. Here now, chef de cuisine Kaz Edwards tells us about coming of age – both his and the restaurant's.

You've been with Uchi for a while now.
Yeah. I worked in Austin before coming here, so I'm actually celebrating 10 years with Uchi and two years here.

How has the second year been different than the first?
There's much more consistency for us now. The first year, everything just seemed these extreme highs and lows, both in terms of people coming into the restaurant and with the staff as well – now, we have this great core team of people who've been with us from the beginning and we're all meshing together much more. We've managed to get over some of the growing pains in trying to bring this Austin concept to Hosuton.

How has the experience of Uchi in Houston been different from its Austin counterpart?
Austin has a very different crowd; it's a little more college, a little younger. Learning the differences between the two cities was something we really had to work with that first year. Here in Houston, diners are a little older, they're more experienced when it comes to dining out because they've been doing it for a long time. They're more into wine, and one of the things we wound up doing was improving the wine program. We've got great sommeliers who are really focused on what pairs well with our cuisine. We don't serve hard alcohol, for example, since it tends to numb the palate and we really want to connect the idea that what you drink should work with what you're eating. 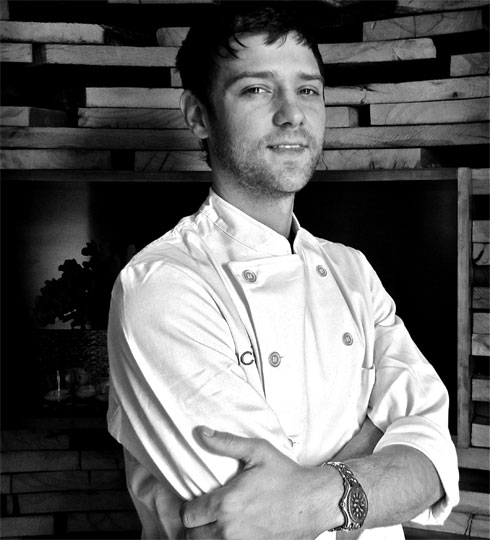 No one who's ever been to Uchi denies it's unlike anything else. What do you think makes the restaurant so special?
It's all encompassing. The food's good. The service is good. So is the atmosphere. Everything is painstakingly done. We took the whole concept of a sushi bar and expanded it out into a restaurant. At a sushi bar, you talk to chef, you see what he's doing, you try things out. Here, we offer that at the table, with our servers being able to guide you through the menu –

It's a huge menu!
It is. And it can be really daunting if you don't have someone to guide that experience and you don't know much about this style of cuisine. Our front-of-house staff is amazing, and they're happy to be here, so it translates to the customer experience.

So, what do you advise people when they come in and they see this massive menu and think, "Man, what did I get myself into?"
We know we're a unique place, and we want diners to experience us as such. So, my advice is, trust your server. Let them be your guide, so you can sit back and relax and see what a great time this becomes. We want you to have fun here, and we're always talking about ourselves in terms of family, so we present that experience to our guests. Uchi means "home," and we want people to know they're welcome and we'll take care of them.

What's developed into menu standouts?
The madai (Japanese sea bream) for sure. On our cold tastings, the hama chili, which is baby yellow¬tail, done with ponzu, thai chili, orange supreme. And the hamachi nabe, which is done at your table with crispy rice. Man, people freak out over that.

You're marking two personal milestones this year, your own 10th anniversary with the company and Uchi Houston's second year. What does that feel like for you?
You know, in this business, you often end up bouncing around a lot, going from restaurant to restaurant to hone your skills or learn new things. I've been really lucky. I haven't had to do that – and I learn something every day here. Uchi has a real commitment to staff development and I love how we offer scholarships so our people can go off and learn something if they want, then bring it back to us. To me, that's one thing that makes us an amazing company to be part of. When I came out of culinary school, I set some goals for myself and I've been able to work on them here.

So, what's next?
Well, that's always up in the air. But we're looking to open Uchi Dallas [It's opening early 2015, more details here.] and exploring some other concepts. But, we're always growing, and there is always something else to do.