When Cove opened inside the bar space at Haven a little over a year ago, Eater Houston's 2013 Chef of the Year Jean-Philippe Gaston, the chef de cuisine at Haven and Cove, the mastermind behind the raw bar concept, figured it would be a unique addition to Houston's dining scene. He had no idea how right he would be, or that the tiny gem would take the No. 10 spot on Alison Cook's Top 100 Restaurants list last year. He talked to us about on a year in business, his passion for raw food and how he should've trained his support staff.

Tell us how the first year has been for you.
It's been very good. Both in terms of media coverage and the love we've received from the city. I really didn't know how people would react to us, so I am pleasantly surprised at how they took us in.

You do have a pretty startling concept to a lot of people, serving raw food. How did that come about?
Randy [Evans, executive chef/co-owner at Haven] and I were just chatting one day, about how we couldn't believe there wasn't a raw bar in Houston. You know, for such a coastal city. In New York City, there are raw bars all over the place. Here, we hardly have any seafood restaurants, never mind a raw bar. So, we figured we could do one, only I didn't want it to be like a 1984 raw bar, with shrimp or ceviche or sashimi. I wanted to show it could be more than that.

Because you have a passion for raw food.
Right. I grew up traveling a lot, and I've been really influenced by Japanese food and Japanese-based flavors; those were always a part of me, somehow. I worked my way into a Japanese restaurant, and along the way, I developed a whole raw, clean food philosophy. And I love fusion. I'll use French technique with Japanese flavors, or fuse Asian and South American flavors.

And you made a commitment to make the menu at Cove be about world cuisine. Tell us about that.
Well, there's raw food components in different countries all over the world. So, I started thinking how we could use that. And the menu became about different fish and meat preparations around the world. Like the Poissant Cru, which is very traditional French Polynesian. We marinate the lionfish in citrus, then serve it in coconut broth, which gives it this powerful flavor, but the fish is still delicate and mild. 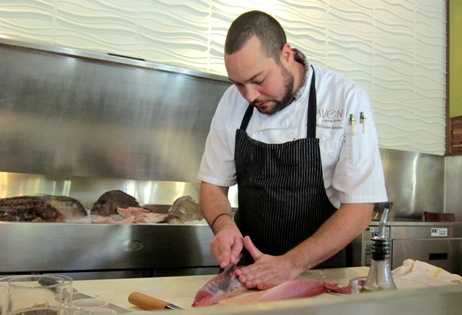 One of the things you and your team seem to really like is being able to talk to diners about what they're eating. How does your set up, of being a bar-within-a-bar-within-a-restaurant help with that?
You know, Haven has a great bar. And some of the best bar minds in the city helped create the menu there. But the bar takes up about a third of the restaurant, and we were wondering how to make better use of the space, so it made sense to turn over part of it for this. And Cove has a small section here. So, we get to have an educational component to what we're doing, telling people about dishes and the way we created them. A lot of the menu is really approachable, and there are things people have seen before, like carpaccio and tartare – those are all classic dishes.

What are some of the things on the menu everyone gravitates toward?
Besides the Poissant Cru, the octopus, from Greece. We marinate it and serve with capers, olives and feta cheese. And we take the arugula and turn that into an emulsion and make an aioli out of it. It's not overly complicated, but it's great flavor.

And the menu isn't just fish, we should point out.
No. When I was working on it, I wanted a true raw bar, showcasing meats and cheeses and how those dishes were different all over the world. So, we work with wild game, we've done a lamb heart with lemon vinaigrette. I had this idea that from starters to dessert, you could get a great raw meal. And the lamb heart – people forget the heart isn't an organ, it's a muscle. And it's actually a really nice piece of meat; it's like a tender piece of leg meat. I clean it, and then truss it and freeze it, so I get a paper thin cut, then serve it with the vinegars and capers and shallots. It's simple and delicious.

That's your compass, it appears, simple and delicious. But let's talk about the lionfish. That is delicious, but poisonous. What do you do to it that makes it safe to eat? Should people be worried they're consuming something dangerous?
Only the thorns are poisonous, along the fins and spine. Once you cut off the thorns, you're fine. So, that' what we do. It's a pretty small fish. And you can only catch it spearfishing. It's funny, the harpoon is enormous and it's this little four-inch fish. But, it has the kind of flavor you can use as a canvas. You can blend it with anything.

So, what's next for you?
We're going to change up some of the dishes, now that people know what we're about and what we're doing. And we're offering a 10-course tasting menu that showcases both hot and cold. Doing $1 oysters from the Gulf. We're always moving forward.

What's one thing you wish someone had told you before you opened?
"Remember to train your staff before you open." I was so focused on the menu that I forgot the two guys who opened with me were fresh out of culinary school and didn't know how to do sushi preparations, so we're open and I'm like, "Hey, we need this and this, why aren't you doing it?" And they tell me, "We don't know how." Man, it was a month crash course for all of us. If just one person had said, train your staff…