Share All sharing options for: David Guerrero to Open Andes Cafe Next Week

Former Samba Grille chef David Guerrero has faced his share of struggles. A brain tumor changed his life when it caused a stroke that left him without a sense of taste, a tough challenge for a young chef. His ability to detect flavors by scent can tell him if a dish has too much of one ingredient or another, and his ability to taste spice endures. So, rather than letting that obstacle get the best of him, Guerrero is forging ahead without the assistance of a sous chef at his new restaurant. For the last three months, Guerrero has been working on Andes Cafe, his new place that will open with a BYOB service next Saturday (Jan. 18). Guerrero tells Eater that this restaurant will showcase food from the South American countries that run the span of the Andes mountain range: Ecuador, Chile, Colombia, Peru, Argentina, Bolivia, Venezuela. As befits any casual South American spot, Andes will have a ceviche bar and Peruvian coffee from Katz Coffee, which will also be sold at the retail level here. Once open, Andes Cafe will serve lunch on weekdays, dinner on Fridays and Saturdays, and brunch on Saturdays. Sunday hours will come in the future. "It's casual, and when I say casual, I'm referring to the atmosphere," Guerrero tells Eater. He hopes that the space is welcoming and that the flavors are well received by this audience, especially after the now-defunct Alma didn't fare well in the Energy Corridor. No word yet on what's going on with Evo, the other restaurant he expected to open this year. The décor at Andes Cafe is clean and contemporary with warm tones. One wall is lined with color-block panels, a contemporary installment. Another wall is graced with a large, colorful mural by local artist Wiley Robertson, who is best known for his street art and for his mural work at Oxheart. 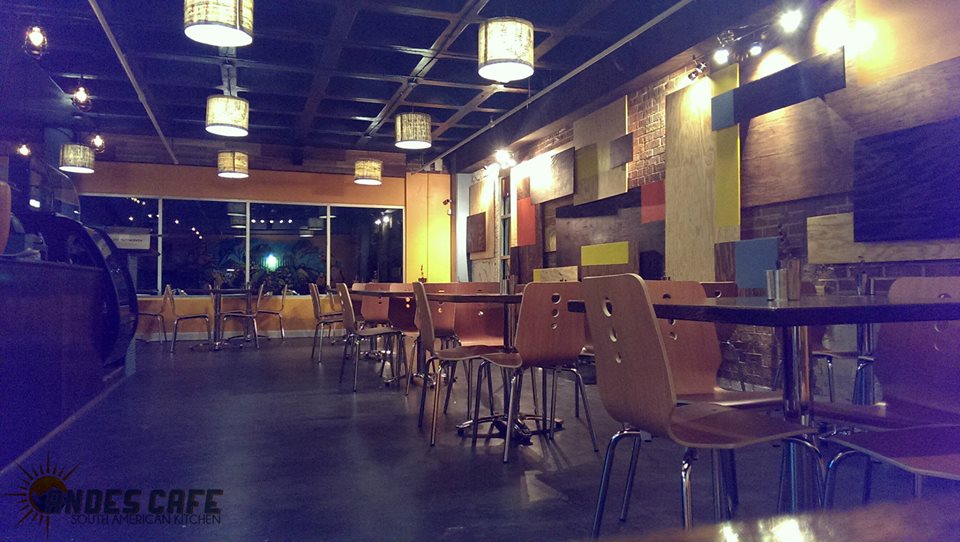