A Japanese mega-chain is bringing yakiniku to Midtown at the upcoming Gyu-Kaku. Behind this establishment is REINS International Inc., a company that owns approximately 700-plus locations with 600 stores in Japan. The company's restaurants are organized by cooking styles, so they have places that focus on izakaya (drinks-centric places with Japanese tapas) and shabu-shabu (boiled meat rather than grilled, hot-pot style). Their first venture in Houston will focus on yakiniku, Japanese barbecue. Yakiniku translates literally to "grilled meat," and the establishments that serve it mimic the Korean barbecue dining format: Cuts of raw meat are presented to your grill-inclusive table, so that you can cook each piece to your liking. Japanese sauces and accompaniments (rather than banchan, natch) will be served on separate plates to let you customize each bite. This upcoming yakiniku place will be opening sometime in the next few months on West Gray (see the map at the top right) directly next to the River Oaks Cleaners, in the strip center that also houses Which Wich and Buffalo Wild Wings.

The menu should offer hot oil seared salmon, samplers for big groups and even ramen, according to our sister site in Boston. (Check out the menu in that city here.) Here's a shot of the interior from the official site: 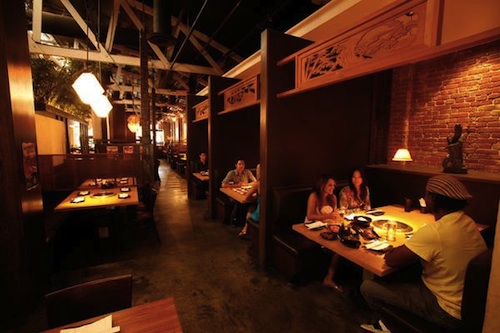 A Beloved Houston Cajun and Soul Food Restaurant Is Expanding