Share All sharing options for: Here Are the Rodeo's Best Bites Competition Winners

Editor markup for Rodeo's Best Bites Competition. This is only visible in the story editor.

Anyone who claimed to be lover of food events was at Reliant Center Sunday night, sampling nibbles from more than 80 Houston restaurants, and pours from nearly twice as many wines. The annual event, put on by the Houston Livestock Show and Rodeo's wine committees, marked its 10th anniversary. A chance to nosh your way through both favorite establishments and upstarts, the highlight of Best Bites is the competition behind it, where media judges offer awards, and participants vote for their favorites from dishes submitted by area chefs and caterers. There's also the opportunity to drink several of the award-winning wines from the International Wine Competition, no small feat, given the seemingly endless samplings available.

All the heavy hitters were out in force, including Haven, with a Frito Pie served in the Frito bag; Cove, dishing up Gulf oysters, chef Ronnie Killen with his much-anticipated barbecue, Roost with the crowd-pleasing fried cauliflower and Le Mistral showing off a smoky, Texas-themed Cowboy cassoulet. Kiran Verma, of Kiran's in Highland Village offered a bison burger and freshly made French fry, a savory treat that took home third place in the Trailblazing Appetizer/Entrée category. She said she does the burger with Chaat Masala, a blend of cumin, cayenne pepper and black salt. "And the bun has a vindaloo aioli, and I topped the bison with a vindaloo onion jam." Haven's chef Randy Evans took home first prize in the same category, for his wild boar chili-Frito pie presentation. 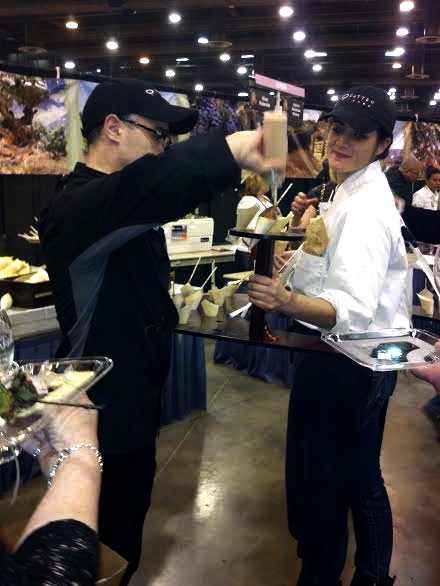 Chef Richie DePlacencia, of Mario's Seawall Kitchen in Galveston who wound up with two awards, 2nd place in the Trailblazing Appetizer/Entrée category, and grabbing the Tasty Traditions Award. He seemed both thrilled and a little overwhelmed. "Wow, it's an honor to win two awards, it blows my mind!" he said as his crew was breaking down. "We use these family recipes from my boss' mom. This is so great." Caterer Michelle Tadeo-Hernandez, who's behind Catering to Your Taste Buds, offered a crab bisque shooter, but came home with the Showmanship Award for the second year in a row. She says she's already hoping for a three-peat next year. "Oh, my gosh!" she said about her win, grinning in surprise. "We're coming back."

Winemakers and wine reps from wineries all over the world were out in force, too, many of them a little awestruck over the scale of both the event and the Rodeo behind it. "In many other cities, when you win a competition, you get a medal," explained Mick Schroeter, the winemaking director at Sonoma-Cutrer, whose 2010 Russian River Valley estate-bottled Pinot Noir brought home the Reserve Grand Champion Best of Show Award in November's International Wine Competition and was proudly displaying his saddle award. "Here, with something like this, there's an incredible opportunity to expose people to what you do and have a lot of support in the marketplace."

· All Other Rodeo Coverage [-EHOU-]