Evan Turner is Out as Beverage Specialist at Vallone's

Share All sharing options for: Evan Turner is Out as Beverage Specialist at Vallone's

Two-month-old Vallone's is about to replace its famed sommelier. Evan Turner is leaving his post as beverage specialist at that high-end steakhouse. Turner found success at now-defunct Gravitas, Branch Water Tavern and Flora & Muse, and he's hosted a number of Greek wine pairing dinners. As for the steakhouse, a few days ago, a Craigslist listing sought out a replacement for this role, but a representative for Vallone's told Eater that they have already found a new wine guru to lead the beverage program there. They're unwilling to reveal the name of the new wine director because that person is still employed by another establishment. The rep told Eater: "The Vallone's management wishes [Turner] well in his future endeavors." They further clarify that Turner was not fired, and that he was supposed to remain on board indefinitely, not just to launch the wine program there; the rep maintains that it was "an amicable parting of ways." 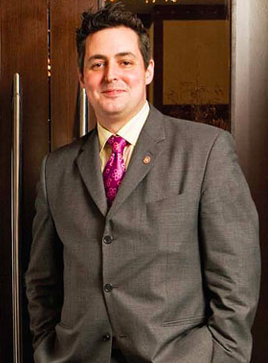 And at least one of those future endeavors includes opening a restaurant of his own. While Turner hasn't disclosed the reason for his departure just yet, speculation would lead some to believe that it might have something to do with Helen: Greek Food & Wine, the name of his upcoming Greek restaurant. Turner told Alison Cook last year that he intended to set up a shop under that name, which was also the title of his Greek pop-up series. He told Cook that the place would "involve very traditional regional dishes of a type seldom seen in America, along with more 'stereotypical' classics turned on their head. And there will be an emphasis on Greek ideas carried out with locally sourced ingredients, particularly Gulf seafood."

Here's Turner's Tweet from this past weekend, which lead an Eater tipster to send us the hint:

Thanks to everyone @VallonesHouston it was great and I wish you all nothing but the greatest success! Cheers!

Check back for the name of the new wine director at Vallone's and for progress on Turner's upcoming Greek restaurant.
· All Other Staff Shuffles [-EHOU-]